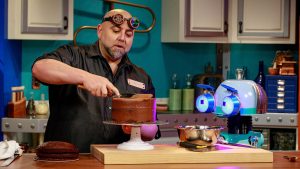 The 6 x 30-minute original, Duff’s Happy Fun Bake Time, will debut on 29 April and see Duff Goldman and his puppet crew taking to the kitchen to explore the science behind cooking and baking. Together, they will discover how ingredients combine to create delicious dishes.

The series is executive produced by Lisa Henson and Halle Stanford for The Jim Henson Company as well as Duff Goldman, Lisa Shotland and Jason deVilliers.

“I think cooking is absolutely fascinating and I wanted to make a show that explained why things happen the way they do in the kitchen. When I understand the science behind the food I make, I somehow feel more connected to it and I wanted to share that with everyone,” said Goldman.

“From battling a sea monster, to meeting aliens, to befriending a robot, a sloth, and a crab, Duff wanted to play in a dream fantasy kitchen, and we wanted to bring all of his hilarious puppet dreams to life!” said Halle Stanford, president of television for The Jim Henson Company. “Duff’s enthusiasm and creativity matched perfectly with our own passion to keep families excited to explore and play together in the kitchen.”

The A+E Networks-backed Law&Crime Network will provide primetime coverage of the Derek Chauvin trial for the alleged murder of George Floyd.

New York City public defender and Law&Crime host Brian Buckmire will be live at the Minneapolis courthouse every day, beginning 29 March, when opening statements are set to begin. Throughout the trial period, Buckmire will provide viewers with daily real-time coverage and interviews with those involved.

“I am honored to have the privilege of covering one of the most historic trials of our lifetime. I became a public defender to provide a voice to the voiceless community and I hope our coverage of this trial informs viewers of critical facts of the death of George Floyd through analysis of this incredibly divisive case,” said Buckmire. 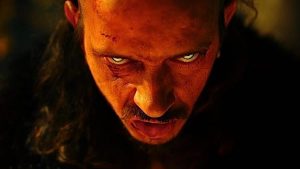 US streamer Hulu has picked up the second season of Israeli vampire drama Juda, following a deal with distributor Banijay Rights.

Produced by United Studios of Israel for HOT, Zion Baruch will return to write and star in the series as the titular lead, which will land on Hulu on 30 March.

The sophomore 7 x 60-season sees Juda the Jewish vampire set out to return his lost love, while being chased by the young generation of Romanian vampires, as a new front opens against the ISIS-backed French werewolves.

“We are thrilled that Juda season two will return stream on Hulu,” said Nadav Hanin, HOT’s VP of content. “As HOT continues to affirm its foothold in the international content market, our original shows keep gaining interest and rapport around the world.”