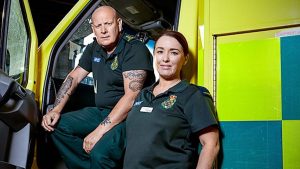 Banijay UK-owned prodco Dragonfly is setting up a new office in the north of England to produce 12 episodes of obs-doc series Ambulance and working with the commissioner, UK pubcaster the BBC, to find and develop the next generation of documentary talent from the region.

Dragonfly North will be based in the city of Manchester, with its 12-episode commission from the BBC to span across two new seasons of Ambulance. Working out of the same office building as Banijay UK sibling Workerbee, Dragonfly North will become a base for the Ambulance production team which will be overseen by executive producer Peter Wallis-Tayler.

Wallis-Tayler and Simon Ford will executive produce the new seasons for Dragonfly, with season seven of Ambulance returning to BBC One later this year, following the crews at the North West Ambulance Service, which receives over 4,000 emergency calls a day. The series, filmed earlier this year, will highlight the work the ambulance service provided during the height of the pandemic.

Dragonfly and the BBC have also built-in two development schemes alongside the commission, with Dragonfly recruiting two trainee film editors for season eight of Ambulance. The two 10-week training schemes will teach the craft of editing and storytelling, giving the trainees chance to work alongside an experienced film editor, whilst cutting at a post-production houses in Manchester and Central London.

The production company, with the support of the BBC, has also taken on one north west-based senior producer and one diverse senior producer as part of a training scheme to prodvide them with on-the-job training across pre and post-production.

“I very much see this as a high end obs-doc unit in the north,” said Richard Bond, MD of Dragonfly Film and TV. “There’s such an impressive pool of local talent, it’s the perfect base for Ambulance, and I’m hugely excited by the prospect of developing new stories and voices from the region.”

“Ambulance has a fantastic track record of bringing stories from across the UK to the screen and developing production talent,” commented Beejal Patel, BBC commissioning editor. “I’m delighted that it is returning for a further two series and I’m looking forward to working with the team at Dragonfly North to build on its success and use this as a real opportunity to support and grow talent and skills in the north of England.”