Globo Group’s children’s unit Gloob has reinforced its role within the Brazilian media giant in recent weeks, following the launch of Globo’s ‘Uma So Globo’, or ‘One Globo’, concept at its virtual upfront event, New Globo, New Opportunities, earlier this year.

With Globo including a diverse range of children’s series as a key part of its international portfolio, the company’s head of kids & entertainment & channels, Tatiana Costa, tells TBI that Gloob’s presence in the global market is only set to expand – along with its “100% Brazilian” kids content offering.

“The channel has consolidated itself over the past nine years as an important player in the national and international markets,” says Costa. “For this reason, we maintain our active search for diversification in content so that our portfolio continues to be a reference in children’s content, both in original productions and in international co-productions.”

Through this growing presence in global co-pros, Gloob has helped to bring Brazilian-made content to the world stage, says Costa: “We have become strategic partners in Latin America for major media companies in the world, which has guaranteed us the role of co-producers in global successes, as in the animation Miraculous: The Adventures Of Ladybug, for which we are responsible for the artistic development of the new seasons.”

Among the company’s programming highlights headed to international market this year are live-action shows such as Valentins and Brainiacs and the children’s sitcom Game Crashers.

What they all have in common, explains Costa, is that they all have an essential “Brazilian-ness”, and the exec believes will connect with children and adolescents “by portraying narratives that are easy to identify.” On the animation side, Gloob is also presenting Senninha On The Crazy Race, Gigablaster and Time To Rock, which Costa again notes “are developed in the country and take Brazilian culture to children around the world.”

She explains that: “We always look for innovative formats, engaging narratives with 100% Brazilian DNA, high production value and most importantly: real children as protagonists.

“The audience can see themselves in our characters. We believe that this is the formula that guarantees the highlight of our productions, whether here in Brazil or anywhere else in the world.” 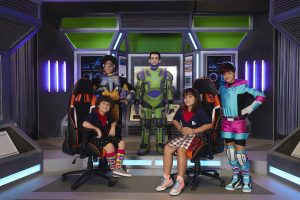 While Costa seems certain this recipe makes Gloob’s content appealing internationally, she also notes that right now, globally, “the great opportunities are in content that addresses topics such as the real life of children, especially at this time, when social distance and the implications of the pandemic have affected both children and youth.”

The exec adds that content that addresses issues related to the environment, diversity and critical thinking, “without losing sight of the quality of production and the potential to entertain and amuse the child audience” are “necessary.”

“More than ever, the value of the message is as important to the end result as the richness of the narrative and the characters, especially for the audience of our channels.”