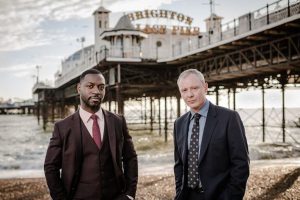 The series, based on the Roy Grace novels by author Peter James, will land on the service in the US and Canada on 27 April.

Produced by Second Act Productions, Tall Story Pictures (both part of ITV Studios) and Vaudeville Productions, and debuting on ITV in the UK earlier this month, Grace stars John Simm (Doctor Who) as the titular hard-working, Brighton-based detective, who is outcast from his usual post due to his unorthodox crime-solving methods and ends up digging into long-forgotten cold cases.

The series is distributed internationally by ITV Studios and includes two 90-minute standalone instalments based on the first two books in James’ book series, Dead Simple and Looking Good Dead.

Grace will be the most recent addition to BritBox North America’s slate of original crime shows, including including The Pembrokeshire Murders, Honour and A Confession.

“Grace contains all the elements of what our audience is looking for from BritBox: an award-winning writing team, phenomenal British cast, and most importantly, a compelling mystery story packed with shocking twists,” said Emily Powers, head of BritBox North America.

“As the only authentic British streaming service available in North America, we have and continue to premiere edgy, modern, premium content.”