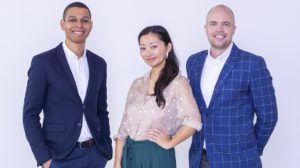 Current head of fiction Daniel Svarts has been appointed VP as part of the company’s increased focus in the genre and its efforts to widen its Nordic imprint. In his new role Svarts will take cross-functional management of STV’s companies in Denmark, Norway and Sweden.

He will also become part of the common board of directors alongside of CCO Maria Thastum, CFO Kent Pedersen, COO Jens Villebro and founder, CEO René Szczyrbak.

Jerichow will meanwhile be promoted from head of event and factual to head of programming, where he will strengthen the management of STV’s executive producers across genres including events, factual entertainment, crime/documentary, lifestyle and reality.

Dreyer has been appointed head of scripted due to the company’s increasing success with serial fiction in Denmark. She has previously served as showrunner on both The First Years and Across The Line for STV.

All three will continue to be involved at the executive producer level in day-to-day programming operations.

“The demand for more content on the Scandinavian market in this time of streaming requires a more synergy-driven operation between programming and production as well as an increased focus on fiction and documentary,” said CCO Maria Thastum.

“The appointment of our three colleagues is a cornerstone in that effort. We are incredibly proud of them, and our expectations are very high.”