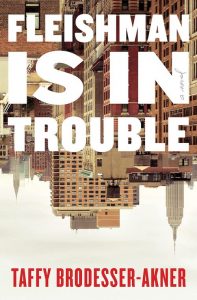 FX orders Fleishman Is In Trouble for Hulu

FX is adapting Taffy Brodesser-Akner’s novel Fleishman Is In Trouble for TV, with the show set to be available via the US network’s branded section on fellow Disney-owned streamer Hulu.

Brodesser-Akner will serve as the writer of the nine-episode limited series and executive produce it along with Sarah Timberman, Carl Beverly and Susannah Grant. The show, which will be known as Fleishman Is In Trouble, will be produced by Disney-owned ABC Signature.

Gina Balian, president of originals at FX, said the drama would offer “an unsparing, modern take on life, love and commitment.”

Fleishman Is In Trouble revolves around a recently separated forty-something man as he juggles his new-found single life with caring for his children, after his former wife disappears. It marks the first TV show written by Brodesser-Akner, who works at The New York Times Magazine.

US cablenet OWN has ordered a new drama about California’s Napa Valley from showrunner/writer/producer Janine Sherman Barrois (Claws).

The Kings Of Napa focuses on the power struggle between wealthy siblings living in Napa Valley and will be produced by Warner Bros. Television and Oprah Winfrey’s Harpo Films. Production will begin later in 2021 for an early 2022 premiere on OWN.

Barrois, who has an overall deal with Warner Bros., is executive producer along with Michelle Listenbee Brown (Real Husbands Of Hollywood) and Winfrey. Director Matthew A. Cherry (Hair Love) will direct the first two episodes.

ITV heads to The Tower

The adaptation will be known as The Tower and is being written by Patrick Harbinson (Homeland). His recently launched UK firm Windhover Films produces with ITV Studios-owned Mammoth Screen.

Post Mortem is the first of London’s series of novels that track the work and lives of Sergeant Sarah Collins and rookie Lizzie Griffiths. Harbinson will executive produce alongside Mammoth Screen’s founder and CEO Damien Timmer (The Serpent) and Karen Thrussell (Poldark).

The show is distributed internationally by ITVS.