The number of contributions from people of Black, Asian and Minority Ethnic (BAME) backgrounds working off-camera for the main UK broadcasters – BBC, ITV, Channel 4, Channel 5 and Sky – has fallen over the past year, as has the number of women working in senior positions, according to the Creative Diversity Network (CDN).

The CDN has today published its fourth annual report from its Diamond diversity monitoring and reporting system, which focuses on these five UK broadcasters and includes 740,000 contributions from across the industry.

As well as racial and gender imbalances, the report also highlighted a startling lack of representation from the disabled and transgender workforce and comes despite a global push for greater diversity and inclusivity in recent months.

“A lack of diversity is evident across many senior off-screen roles, suggesting that significant barriers to career progression are still in place and hindering the development of a more diverse workforce at senior levels of the industry,” noted the report.

The number of contributions at a senior level made by women also dropped to 47.1%, down from 50.4% in 2018-19, with the report stating that: “Women are particularly poorly represented in the role of directors (29%) and writers, where contributions have fallen from 38.1% last year to 33.4% this year.”

Disabled people were also severely underrepresented behind-the-scenes, accounting for just 5.8% of the off-screen workforce, well below the 17% national workforce estimate, while over-50s were just 21.5% compared to the national figure of 31%. People in these groups were also found tol be significantly under-represented on-screen, making just 7.8% and 24.6% of contributions respectively.

The news was slightly improved for BAME groups, whose on-screen representation has seen a general year-on-year increase, though the number of individual contributions from South Asians has decreased for the fourth year in a row.

Of all the genres, drama remained the worst performer for off-screen contributions by disabled people at 2.7%, a drop from 4.7% in last year’s report, while those identifying as BAME made 5.9% of contributions, falling from last year’s figure of 8.6%.

Off-screen contributions by transgender people, meanwhile, were considered too low to even be reported on in children’s, comedy, current affairs, drama, entertainment and leisure genres. 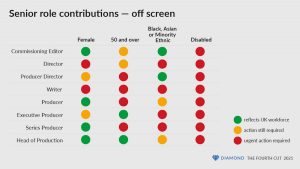 Of the five broadcasters, Channel 4 was reported to have the highest number of off-screen contributions by women at 55.3%, while ITV had the lowest at 46.3%.

The report also highlighted “significant gender imbalances” between production areas, with women predominating in costume and wardrobe departments at 78.5% and hair and make-up roles at 98.3%, while camera, sound and lighting positions “are overwhelmingly occupied by males.” There were also so few disabled people working in costume and wardrobe, hair and make-up and set design positions that the numbers were redacted by the report.

Deborah Williams, CDN executive director and TBI columnist, said that the reported highlighted “the scale of inequality still to be addressed, in particular for people from Black, Asian and Minority Ethnic groups and disabled people, if we are to build an industry from top to bottom which properly reflects our society, our viewers and the aspirations of anyone, from any background, who wants to use their talent to create world-beating television content.”