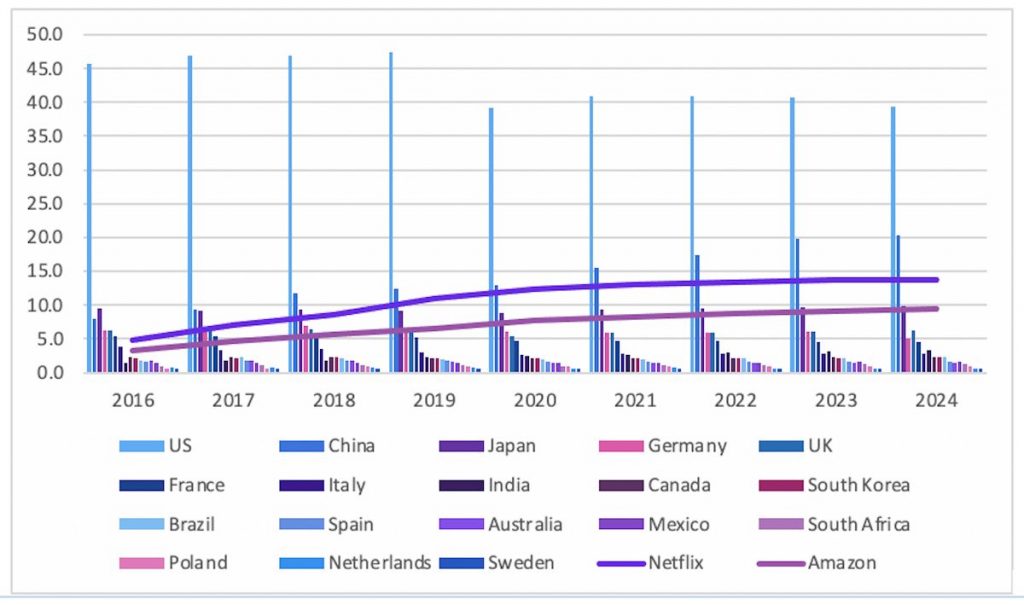 The rise of SVOD has been the main force driving world programming expenditure since 2010. Expenditure on original and acquired programming in the 35 countries tracked by OMDIA’s Channels & Programming Intelligence, plus the global SVOD platforms Amazon and Netflix, amounted to $126.2bn in 2019, up 41.8% since 2010.

Amazon and Netflix alone accounted for 13.9% of expenditure and increased their investment on programming by 2051%. Without these two platforms, expenditure increased 23%.

Netflix, which launched into streaming only in 2007, was second only to the US and China in terms of programming investment in 2019, with Amazon in fifth place behind Japan. 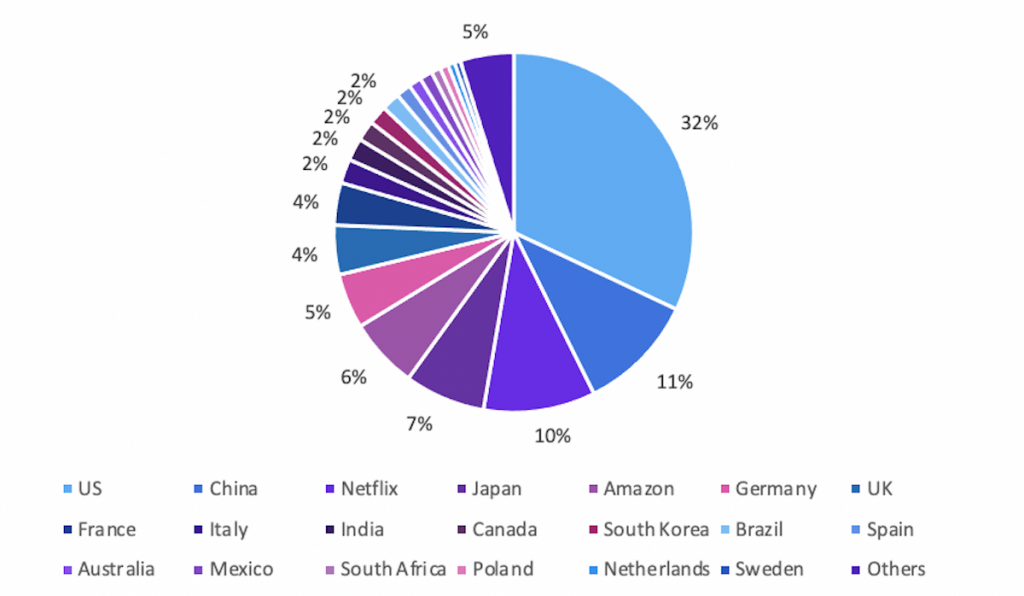 Over the past few years, the two US companies have overtaken Germany, the UK and France – among others – through sheer weight of investment in original and acquired content. Most of these more established markets, still dominated by linear broadcasters (both free-to-air and subscription funded) are growing only sluggishly or shrinking. In Germany, investment in programming was 8% lower in 2019 than in 2010, while in the UK, it increased just 1%.

The greater dynamism of the streamers does not mean that linear television is no longer an important part of the TV programming landscape. The US broadcast networks continue to refresh their schedules every year with a massive quantity of new scripted and unscripted programming (although this year the Covid-19 pandemic has seriously disputed those schedules), while broadcasters in European markets, Japan and South Korea continue to compete for audiences with a high level of original production.

Heavy investment by the streamers is also the rising tide floating all boats, as they have acquired library programming from broadcasters as well as co-producing new programming.

The runaway growth of Netflix in particular has prompted the major US media companies into a change of strategy which places direct-to-consumer (D2C) services at the forefront of their organisations. To some extent, this response to the rising importance of online world was already underway, triggering AT&T’s acquisition of Time Warner and Walt Disney Co’s purchase of most of 21st Century Fox in 2018.

Disney, NBC and WarnerMedia then announced the end of output deals with Netflix and launched new D2C services – respectively Disney Plus, Peacock and HBO Max. Viacom re-merged with CBS and is also developing plans to roll out its CBS All Access service internationally (as part of this roll out the service will rebrand as Paramount+ in early 2021).

To varying degrees, all of these new services are using exclusive, original content such as The Mandalorian to add momentum to their new online services. Walt Disney told investors it planned to invest $1bn in original content for Disney+, launched in November 2019, rising to $2.4bn a year by 2024.

Outside the US, China is the only other country where streaming services have been fueled with a large volume of first-run programming. In Europe, with the notable exception of Viaplay in the Nordic region, national level SVOD services have so far produced little original content, though this is likely to increase, with Joyn in Germany and BritBox in the UK already launching original productions. In Australia, the Nine Network-owned Stan has so far invested in several exclusive shows.

Tim Westcott is senior research manager for channels, programming & advertising at OMDIA, which like TBI is part of Informa. The excerpts above are from his recent extensive report, World TV Production 2020.