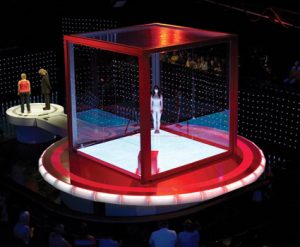 UK commercial broadcaster ITV is preparing a UK-based adventure format and a variety of studio-based gameshows for its new-look fall schedule, as it attempts to navigate the ongoing effects of Covid-19 on production.

It is being hosted by UK presenter AJ Odudu and Top Gear host Freddie Flintoff, with the broadcaster promising “action and adventure as two teams compete against each other in the race of a lifetime.”

The Million Pound Cube, from Wildcard, is a tweaked version of The Cube, and will follow teams of two as they attempt to win up to £1m ($.13m) in tests of nerve and skill, while returners include Family Fortunes, The Chase, and Supermarket Sweep.

Catchphrase, from STV Productions, and Stellify Media’s Who Wants To Be A Millionaire, have already returned to studio productio, while Britain’s Got Talent will resume production with a one-off catch up show before heading into the semi-final shows that were postponed in the spring. These will run weekly on a Saturday night during the autumn.

The Voice UK, from ITV Studios, will also pick up where it left off with a catch up show and a semi final and a live final, while the broadcaster has confirmed reality hit I’m A Celebrity… Get Me Out Of Here! will also return.

The new-look entertainment slate comes after off the back of a hugely turbulent four months for ITV, which cancelled hit reality format Love Island earlier this year and is attempting to stem falling advertising revenues and a dwindling share price.

The broadcaster also confirmed soaps Coronation Street and Emmerdale will resume airing the normal pattern of six episodes each week from mid-September, while previously announced dramas include Mammoth Screen’s The Singapore Grip, The Sister, and serial killer drama, Des.

Factual shows range from Sheridan Smith: Becoming Mum from True Vision, which explores Smith’s mental health struggles and her fears before and after her pregnancy, as well as an untitled show about Prince William from Oxford Films. It will follow the future king as he attempts to affect global action on conservation and climate change.