Dealing with Covid-19: How an Italian teen drama marked a nation’s scripted first 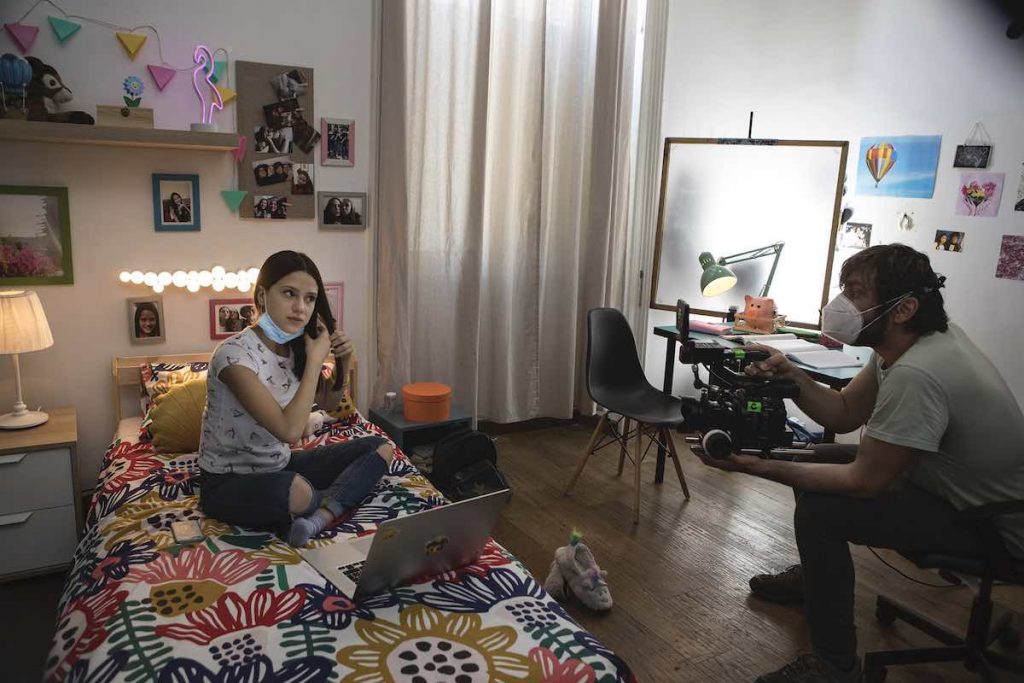 The latest installment of TBI’s extensive coverage of Covid-19 takes us to Italy, where we hear from Stand By Me’s Simona Ercolani on how she delivered a first for the country’s scripted industry during the pandemic.

Italian teen drama JAMS has never been a show to shirk a challenge.

Airing through Italy’s pubcaster Rai, it has become well known around the world across its first two seasons for handling tough subjects such as child molestation and cyberbullying – taking an array of honours to boot.

So perhaps it’s not so surprising that JAMS is now also the first scripted show in the country to have been filmed and delivered during the Coronavirus pandemic that has hit the country so hard.

“I wanted to write and produce something that reflected the reality of what people, especially kids, were living through in this moment across Italy and Europe,” Ercolani tells TBI. “JAMS has won awards for tackling sensitive topics that resonate with young people and it felt like the perfect show to address the experience of kids in quarantine.”

The series, which is produced in consultation with Italian paediatric hospital Bambino Gesù and the country’s ministry of education, had already become Italy’s number one kids programme and Ercolani was bullish that her team could pull off a Covid-19 special, despite the huge production challenges faced.

Throughout the entire process, our interaction was via video chat and we all felt a similar sense of isolation… but also a shared excitement about doing something like this for the first time

“I thought of how Italy’s great filmmaker Roberto Rossellini had proven that war cannot stop storytelling and I felt inspired to demonstrate that this pandemic couldn’t either. So, we presented the idea to Luca Milano at Rai Ragazzi and he immediately said yes. He loved how the idea aligned with Rai’s mission as a public service broadcaster and he and his team have been an incredible support throughout the making of the show.”

The show is produced by Ercolani’s Italian prodco Stand By Me, which was recently acquired by newly minted European group Asacha Media, but it also has Italian paediatric hospital Bambino Gesù and the country’s ministry of education attached as consultants.

Yet even for a show that is well-versed in tackling serious subjects, Covid-19 threw up numerous obstacles. Not least, how to produce a 5 x 25-minute season that could still follow the four friends from the original show and accurately reflect their experiences.

“The safety of our cast and crew informed everything we did, and meticulous planning went into ensuring the government’s Covid-19 safety measures were followed,” Ercolani explains.

“This included filming simultaneously in seven separate apartments, each of which had to be large enough to allow social distancing. Every location had its own Covid-19 health specialist and a 360-degree surveillance camera to ensure protocols were being followed and allowing me to remotely monitor each actor’s position on set. The actors used real time video conferencing to portray the digital interactions between the story’s characters in quarantine, and everything was coordinated remotely from the production gallery. Even the music, which is a central part of the show’s narrative, had to be delivered remotely by a composer who was quarantined in another city.”

The story tracks how the friends adapt to their new reality, experiencing the world through their computers and mobile phones, while fighting to preserve their friendships. The cast improvise from an outline of a script, creating spontaneous and authentic dialogue designed to resonate with young viewers – and Ercolani wanted to deliver the show in time to mark a major milestone in the kids’ year.

“We wanted to mark the end of the school season on 8 June with a show that mirrored what young people had been going through, but we had very little time to deliver that. The three-week production timeline was one of our greatest challenges.

“We were telling a story about something that we were living through ourselves in real time, including all the difficulties and restrictions involved. But that actually provided creative inspiration as well as opportunities to work in new ways, all of which became integral to the production of a show that we are enormously proud of.” 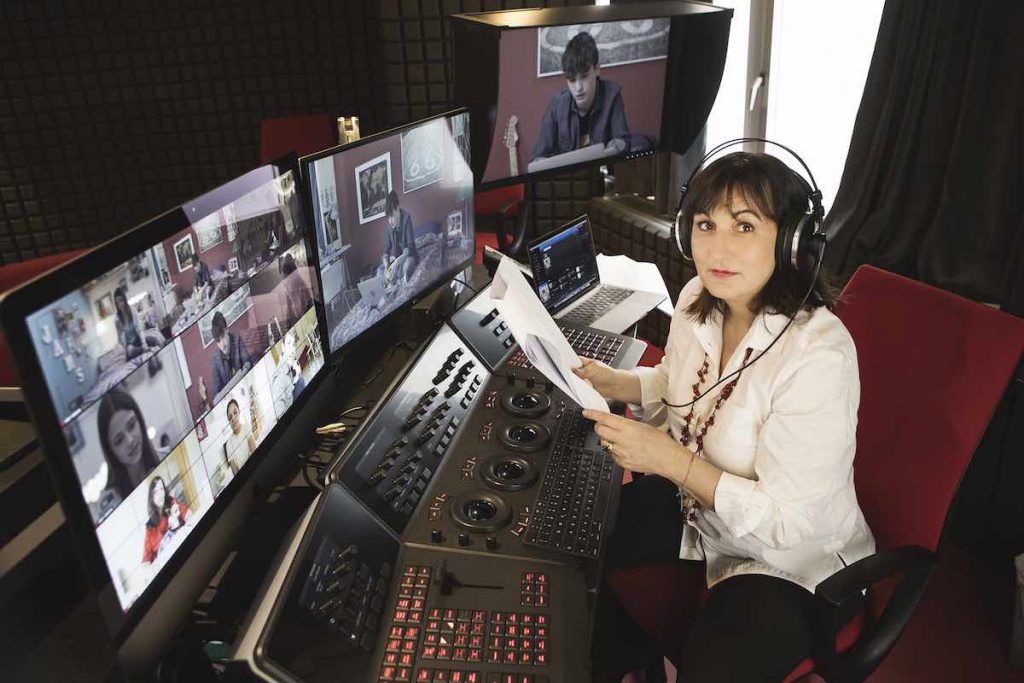 Turning the show around in such a tight timeframe was a challenge on most fronts, Ercolani says, but writing the script was not as arduous as it could have been – but she is clear that a “sense of isolation” was felt in what is normally a group exercise.

“In some ways it was easy to write because everyone involved was facing similar struggles and anxieties to those experienced by the characters in our story. But we still needed to make sure the narrative connected with young viewers. So, as part of the writing process we remotely interviewed around a thousand kids to get a real sense of what life was like for them in lockdown and then had small focus groups of kids review the script each week. The result is something that feels fresh, relevant and authentic.

“Throughout the entire process, our interaction was via video chat and we all felt a similar sense of isolation. At the same time, we felt a shared excitement about doing something like this for the first time, as well as a great sense of solidarity about being in it together.”

The series, which is sold by RaiCom and is available via both Rai Ragazzi (Rai Kids) and digital platform RaiPlay, has also delivered unexpected benefits to Stand By Me and new parent Asacha Media Group.

“We learned so much from making this show, including new ways of working and filming that we can now take with us to future productions, both in Italy and as we pursue new projects and co-productions internationally, as part of Asacha Media Group. For instance, we had to learn how to capture the spontaneity of the performances and improvisation with a remote set up that allows real time interaction with all the cast and multiple crews.

“We also learned a lot about the company and the people we work with. Challenging times bring people closer and we were reminded of how we are very much a family at Stand By Me.” 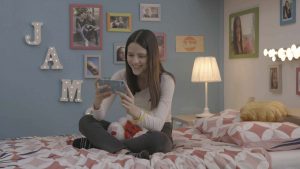 Alongside her role as CEO and creative director at Stand By Me, Ercolani is also group chief creative officer for entertainment, factual & kids at Asacha Media, a company that she says can provide substantial benefits to her own.

“It has plugged all of us into a multinational network of creativity and resources that significantly boosts our ability to develop and travel IP. Our new group has united experienced producers who are committed to the same vision of creating diversified local content that crosses borders.

“A key part of my new role is to ensure we are expanding the reach of our Italian-originated entertainment, factual and kids IP into other markets. I believe the key is to tackle universal themes in these genres, just as we have done with JAMS, and to focus on local and international productions for global streamers looking to rapidly grow their output.”

Ercolani says further investment in new IP, “as well as company acquisitions and start-ups across the region”, is on the cards, while Stand By Me is also building on the JAMS success. It has just launched new four-part entertainment series Love in Quarantine on Rai Uno, which centers around young and old couples in lockdown.

“We are also going back through our entire catalogue to explore how each of our titles might be adapted for these times, while also reviewing our line-up for the fall season,” she says. “This involves everything from reworking formats with live audiences, to switching our focus to genres such as romantic comedy that play well in difficult times. As things continue to evolve, we’ll keep finding new ways to make each one of our shows resonate for audiences in Italy and across Europe.”