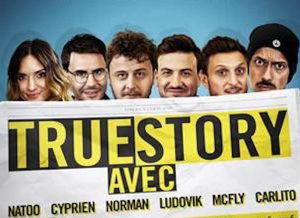 In each episode, two of the YouTubers will speak to one of these celebrities who will recount “an amazing, surprising, funny and – above all – true story,” that has never before revealed to the public. The YouTube stars then enact a reimagining of these recounted events, adding their own brand of humour to the tales.

“After the success of Love Island, we’re super excited to be launching the next French Amazon Original series True Story in June,” said Georgia Brown, director of Amazon Originals Europe. “This format is fun and surprising, and we think Prime Video audiences will really enjoy getting to discover these internet stars in this new role.”

“We continue to invest in French production for our Prime Video audiences in France and around the world,” added Brown. “This show is the latest French production coming to Prime Video from a slate of shows produced with outstanding French talent that we announced earlier this year, including Voltaire, Mixte, Opérations Totems and The Missing One.”