Show of the week: You Sleep, You Lose 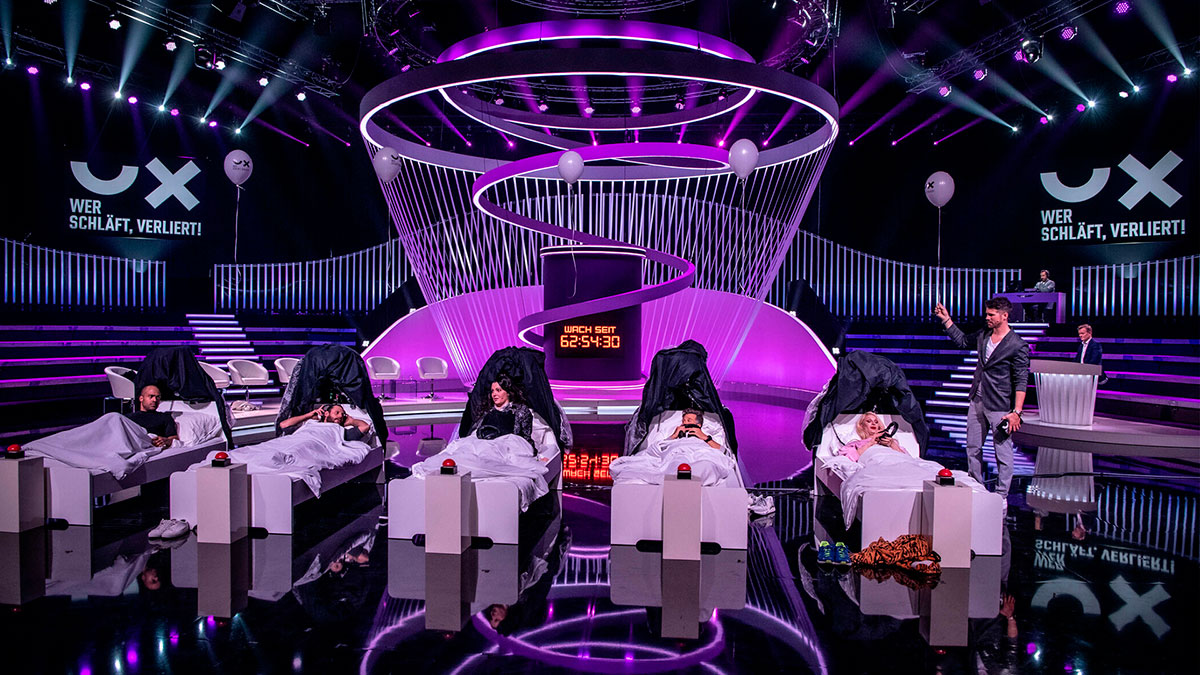 You Sleep, You Lose was not originally destined to be a primetime gameshow, but rather a factual series exploring the effects of sleep deprivation.

German broadcaster ProSieben was planning a themed week around the airing of a TV movie called 9 Days Awake, based on a bestselling book and the initial idea was to create a factual show to sit alongside it.

“But because there was a need to fill a Saturday evening primetime slot, this original concept quickly evolved into more of an entertainment-led idea with factual elements – like explanatory graphics and expert commentary in the studio,” explains Sebastian von Wurmb-Seibel, MD at producer FischWillWurm Media.

The resultant format sees eight celebrities move into a house and face the challenge of staying awake for 60 hours, while being filmed 24/7. They then immediately join a live gameshow and compete against each other in a series of challenges designed to highlight issues caused by lack of sleep – such as the loss of hand-eye coordination.

Celebrities are streamed 24/7 to provide a unique opportunity to observe both the public and private sides of their personalities – and the show is informative too, offering an unusual and entertaining way of examining the importance of sleep

After each challenge, the two worst performers battle each other in a duel, with the loser facing the ultimate test: to stay awake while tucked-up in a cozy bed. Sleep experts analyse the stars’ responses to tiredness throughout and comment on their reactions during the challenges, with the winner the last contestant to fall asleep.

“All the challenges are designed to highlight the deficits that occur when someone is sleep deprived, such as loss of concentration, fine motor skills, endurance, reaction and memory,” explains Von Wurmb-Seibel. Examples include contestants having to count the number of ‘ands’ read during a bedtime story, while another challenge sees those taking part having to recreate shapes originally built by children using play bricks, after looking at them for just 10 seconds.

“Roughly half of the games are played in the house and half in the studio after the contestants have been awake for 60 hours,” adds Von Wurmb-Seibel. “This is so their abilities – with and without sleep – can be compared.”

Von Wurmb-Seibel adds that the health and well-being of contestants is of uppermost concern, with producers running numerous practice shoots to ascertain how contestants might react and where they would need help. “Experts say sleep deprivation only gets risky for the body after 72 hours so the producers looked for the sweet spot that represented a real challenge for the contestants without risking their health,” he adds.

The show ranked top for the night for ProSieben when it aired and boosted the channel’s year-to-date share by 10%. For Tim Gerhartz, SVP of global sales at RASI, it offers a hugely engaging premise with the opportunity for additional brand extensions.

“First and foremost it makes for really compelling, primetime entertainment: that fact that the celebrities are streamed 24/7 provides viewers with a unique opportunity to observe both the public and private sides of their personalities. However, it’s informative too and provides an unusual and entertaining way of examining the importance of sleep,” he says.

“It also offers a number of other brand extensions: ProSieben live streamed the whole 60 hours on ProSieben.de and included commentary from some of the broadcaster’s leading social media faces. Content was also posted on ProSieben’s Instagram feed and its Facebook page and the show was also featured in daily magazine shows ‘Taff’ and ‘Galileo’, not only in the 60 hour lead-up, but also while the main show was aired.”