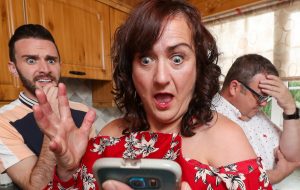 Northern Irish production company Alleycat Films has secured a string of commissions, including a second season renewal from RTÉ for dating format Pulling With My Parents, and three new documentary orders.

The second run order for Pulling With My Parents (6 x 50 minutes) follows the show’s debut last October on RTÉ2.

The new series will roll out on the Irish public broadcaster in the summer and again follows young singletons who enlist their parents to overhaul their online profiles and help them crack the dating game.

The Borrowers was initially produced for RTÉ One, where it aired last year, with the second incarnation on the BBC exploring Northern Ireland’s Credit Union network, setting up fixed rigs in two loan offices at opposite ends of the country.

Belfast Harbour, meanwhile, is an in-depth look at one of the UK’s busiest seaport, home to the legendary Harland and Wolff shipyard and the birthplace of the doomed Titanic.

Also on the slate is My Big Gay Wedding Video (working title, 1 x 30 minutes) for BBC NI’s True North strand. The show marks the legalisation this year of same-sex marriage in Northern Ireland and will invite viewers to a series of very different weddings.