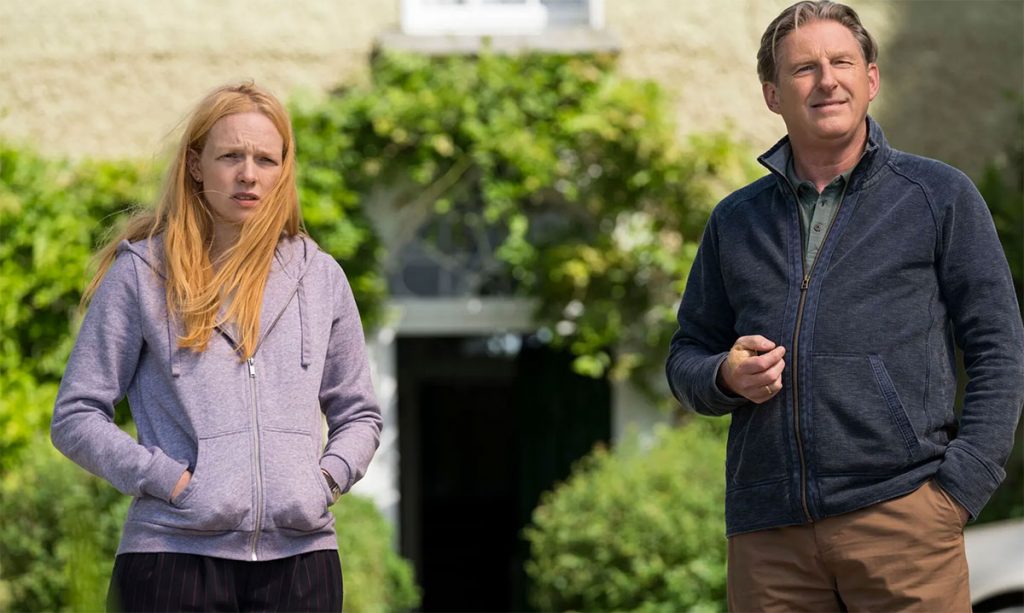 Both women appear close and their families enjoy spending time together.  The series on a warm evening, with a barbecue sizzling on the patio, the perfect family setting. The atmosphere is chilled, as they lounge in Theresa and her partner Fraser’s perfectly manicured garden.  Apart from Fraser’s brother Eddie winding everyone up, there’s hardly a hint of tension, but this is the calm before storm.

When Theresa’s ten-year-old son, Ben, asks to play in the nearby park with his cousin Eva, the adults begin to niggle.  Fraser is relaxed and is fine for them to go, but this doesn’t help Theresa’s fears of foreboding and growing feelings of anxiety.

As expected the children don’t return on time, and Theresa goes in search.  Her suspicions are heightened when she finds the children on the edge of a woodland area and they appear to be fighting.  Immediately her instincts tell her something terrible has happened.

This is all too realised when later that evening distraught neighbour, Jean, calls on the family.  Her ten-year-old son Alex has gone missing. In a plot thick with secrets, lies, twists and turns, Theresa can’t help thinking her son knows more than he is saying. Could Ben and his cousin Eva be implicated in Alex’s disappearance?  Why are they both so subdued and now behaving out of character? The neighbourhood are compelled to help with the search for Alex, but what if he’s been murdered and her own son is his killer?

Hollington Drive has been commissioned by ITV’s Head of Drama, Polly Hill.

Hollington Drive will begin filming later this year and the details of casting and key production personnel will be announced in the coming months.

Hill commented: “I am delighted to be making Sophie’s brilliant script for ITV.  It’s a beautifully written thriller that looks at maternal love and sisterly love, in a story that will compel and surprise the audience.”

Fisher said: “I couldn’t be happier to be re-uniting with the brilliantly talented Sophie Petzal on this gripping family drama. Sophie has written a captivating script that I feel sure will have the viewers hooked.”