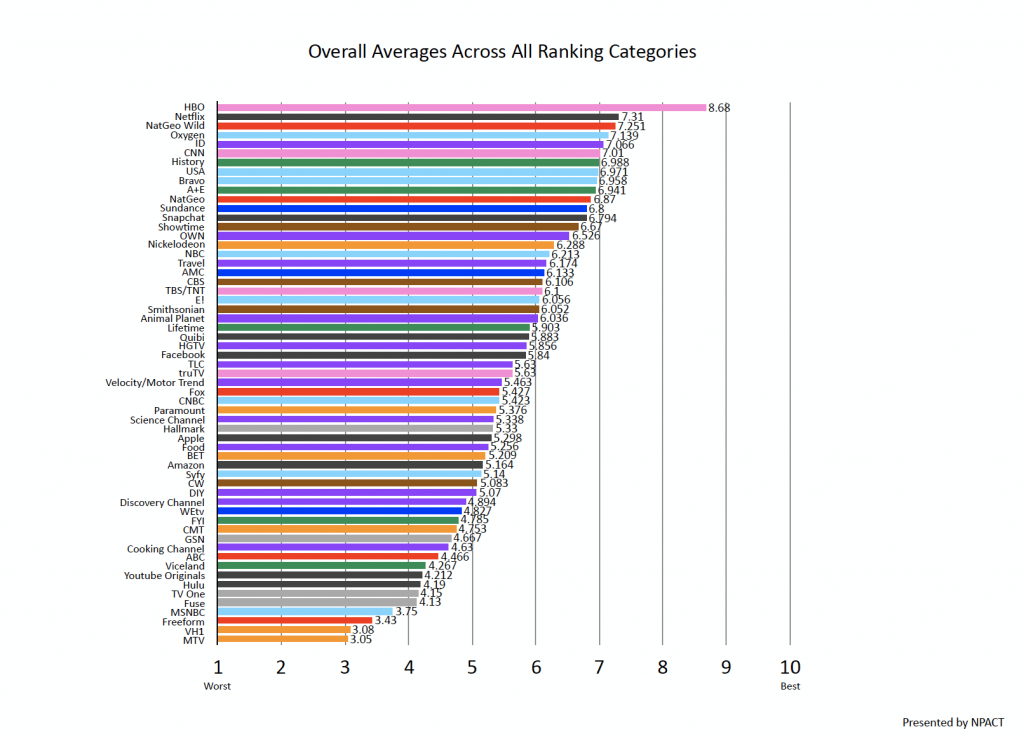 NPACT, the trade association for non-fiction production companies doing business in the US, has unveiled the latest findings from its annual network-ranking survey.

The 2020 Network Ranking Survey report canvassed producers of unscripted, documentary and reality series in the US, including NPACT members and non-members, to rank their favourite – and least favorite – networks and streaming platforms across 11 categories.

The findings included responses from 51 production companies, who were asked to rank only those networks they worked with during the last year. Each network was rated on a scale from one to 10, with one representing the least positive response and 10 representing the most positive.

Final rankings represent the weighted average scores for each network. (Most Improved and Most Respected networks were determined by tally of total votes, rather than rankings).

When looking at overall averages across all survey categories, and when rating networks on an individual basis, HBO emerged as the producers’ favourite. MTV took bottom spot, followed by VH1 and Freeform.

HBO also led the rankings in the categories of Best To Deal With Overall, Pitching, Clarity Regarding Brand/Content Needs and Business Affairs, while USA was first in the category of Programme Development.

Facebook led in Editorial Oversight/Notes, ID took top spot in Production Management, Oxygen was the leader in Finance, and Bravo came in first in Scheduling/Promo Support.

Netflix was cited as the Most Improved overall in the last year, followed by Travel and National Geographic. The US streamer also came out on top among Most Respected networks/platforms, followed by A&E and ID.

Among all networks and platforms, NatGeo Wild was cited in the top 10 across more categories than any other network, followed by Netflix and Oxygen in second place. HBO, A&E, National Geographic, Bravo and CNN tied for third place.