BBC confirms plans to move thousands of staff out of London 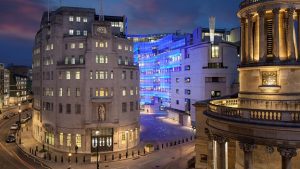 The BBC has confirmed plans to move at least two thirds of its staff outside of London by 2027.

Director general Tony Hall spoke to staff on Wednesday, and confirmed the plans he alluded to in a Financial Times column from the previous weekend.

Hall said that moving jobs away from the capital would “promote inclusion and diversity of thinking.”

In particular, a new tech hub will be opened in Newcastle-upon-Tyne, MediaCity in Salford will become the home of BBC Sounds (the broadcaster’s radio and podcast service), and 150 jobs will be moved to Bristol.

As reported by BBC News, Hall said: “”Our centres have become magnets for ideas and talent, new jobs and investment. That’s really good news. But I know we can go further. We can do so much more for this country – and we’re going to – starting this year.”

In addition to the job moves, Hall spoke about the previously announced redesign to the BBC iPlayer, saying that children’s content will be presented in a “radically different way”.

Lastly, Hall called on staff to be proud of the broadcaster, in light of prime minister Boris Johnson’s questioning of its value to tax payers. “Don’t be defensive about the BBC,” he said. “We need to demonstrate why we matter.”