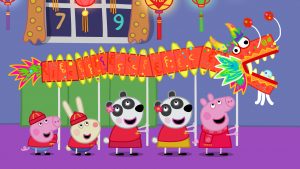 Power Rangers owner Hasbro has completed its $3.8bn deal (£2.9bn) to acquire Entertainment One (eOne), the company behind kids behemoth Peppa Pig and dramas such as The Rookie.

Elsewhere, eOne’s president of family & brands Olivier Dumont will also move to Hasbro, along with former DreamWorks Animation exec Steve Bertram, who heads up film & TV for the Canadian firm, and music president Chris Taylor. All three report to Throop.

The acquisition will see the US play and entertainment brand – which is the parent company of labels such as My Little Pony and Transformers – adding eOne’s global brands such as Peppa Pig and PJ Masks to its portfolio, along with an extensive film and TV business that includes TV titles such as Sharp Objects, Deputy and The Rookie.

eOne also owns an array of production interests, including The Mark Gordon Company and a fast-growing unscripted portfolio. Last year, it took stakes in UK outfit Daisybeck Studios and US-based Blackfin, the latter deal struck just weeks after the Hasbro deal was announced. Other prodcos under the eOne masthead include Creature Films, Marwar Junction Productions and Fired Up Films.

Goldner said: “We are excited about what we can do together and see tremendous opportunity for shareholder value creation through this acquisition.

“Our businesses are highly complementary with substantial synergies and a great cultural fit. The addition of eOne accelerates our blueprint strategy by expanding our brand portfolio with eOne’s beloved global preschool brands, adding proven TV and film expertise, and creating additional opportunities for long-term profitable growth.”

The business is understood to view live action and animation as new avenues through which to leverage its franchises, particularly for SVOD platforms and networks.