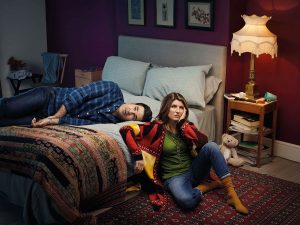 Apple has struck an exclusive first-look deal with Sharon Horgan.

The pact comes after Catastrophe creator Horgan’s deal with Amazon expired and will include all projects written by the Divorce scribe.

Horgan starred alongside comedian Rob Delaney in Catastrophe and has also appeared in shows including Army Wives. She is also behind UK-based prodco Merman Television, which was launched with Clelia Mountford.

Earlier this month, the prodco struck a two-year funding and distribution deal with UK pay-TV operator Sky’s production outfit Sky Studios. That pact, which is separate to the Apple agreement, covers overhead and development funding and includes a first-look distribution arrangement.

It will see the business expand its UK scripted team to develop global-facing drama – last week it bolstered its production and financing team – while Sky sibling NBCUniversal Global Distribution is handling international sales for co-developed projects.

Merman previously had a two-year first-look deal with Amazon Studios, signed in January 2018, as part of its deal with Horgan. The prodco has won multiple awards including three BAFTAs, and numerous Emmy and RTS nominations, since its creation in 2014.

The outfit’s slate includes Frayed for Sky/ABC Australia, This Way Up for Hulu/Channel 4, There She Goes for BBC/Britbox and Motherland for BBC Two. Merman also has a number of projects for development at various US networks and platforms, including Shining Vale for Starz, Therapy Dog for Fox, Guru for Amazon and Delilah for HBO Max.