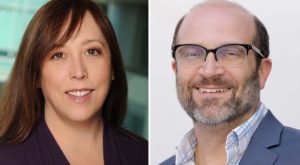 Fox SVPs Dana Sharpless and Steve Sicherman have been upped to become co-heads of the studio’s current arm, with Sharpless focusing on drama and Sicherman centered on comedy.

The duo will work across live action series for all networks, as well as steamers and cablenets.

Sharpless and Sicherman will replace Carolyn Cassidy, who was promoted from to become president of creative affairs in July. The duo will report into Cassidy.

Cassidy said: “I feel very fortunate to hand over the current programming team to Dana and Steve, who have been tremendous contributors to the success of 20th.

“They are smart, strategic and beloved by all producers, writers and directors they work with as well as everyone inside our company.”

Sicherman has worked on shows including This Is Us and Speechless, having previously been director of comedy at 20th Century Fox Television. Sharpless was most recently SVP of current programming at the studio, and has credits on series including American Horror Story and 9-1-1.