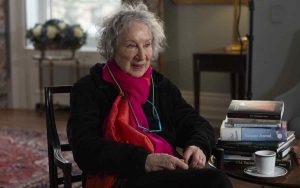 Sky Arts in the UK, US streamer Hulu and SBS in Australia are among buyers of a documentary about Margaret Atwood, author of The Handmaid’s Tale and its sequel The Testaments.

Margaret Atwood: A Word After A Word After A Word is Power (1 x 92 minutes and 1 x 78 minutes) follows the famous author over an exclusive 12-month period, exploring her major works and delving into her youth. Earlier this year Atwood was named joint winner of the 2019 Booker Prize for The Testaments.

The show is produced by White Pine Pictures Production in association with Canuck broadcaster CBC and has also been picked up by: Sky in New Zealand; NDR-Arte in Austria, France, Germany, Liechtenstein, Luxembourg and Switzerland; HBO in Central and Eastern Europe; YLE in Finland; SVT in Sweden; ERR Estonia; and NTR in the Netherlands.

It is sold by Kew Media Distribution (KMD) and will premiere on CBC’s documentary Channel on 19 November. The doc is co-directed and co-produced by Nancy Lang and Peter Raymont, with Peter Pearson as executive producer and Connie Littlefield as associate producer.

Jonathan Ford, EVP of sales at KMD, said: “If we needed proof of the rise in demand for fascinating, topical documentaries, then this is it. Margaret Atwood’s literary superstardom has translated into worldwide interest in this film and we can only see this increasing following the recent Booker Prize co-win for her latest novel, The Testaments.”