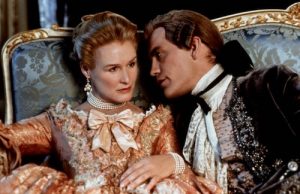 US cabler Starz has added another period drama to its slate, this time an adaptation of French novel Dangerous Liaisons.

The show will be based on Pierre Choderlos de Laclos’s novel and will be produced by UK producer Playground with Flame Ventures, in association with Starz parent Lionsgate.

Call The Midwife‘s Harriet Warner is attached as showrunner and writer, with Playground’s Colin Callender and Tony Krantz among exec producers.

The novel has previously been adapted in theatre and as a movie, with the 1988 film (pictured) by Warner Bros. winning three Oscars. The show will explore the origins of the lead characters, who become young lovers in the slums of Paris, and joins Outlander and The Spanish Princess on Starz period drama slate.

The cabler has also ordered a third season of anthology series The Girlfriend Experience, which is being written and directed by Anja Marquardt. It has Steven Soderbergh and Charles Fleishman executive producing, with Transactional Pictures, Populist Pictures and Magnolia Pictures also attached.

Starz has also greenlit docuseries Leavenworth, another project that will be produced by Soderbergh. It explores the life of a soldier who is serving a 19-year sentence in a US federal prison for murder following an incident that occurred while he was deployed to Afghanistan in 2012.