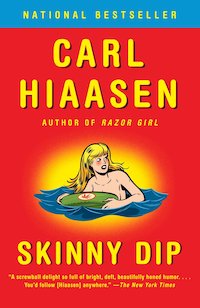 Jeffery Katzenberg and Meg Whitman’s yet-to-launch short-form streamer Quibi is developing a comedy show that was previously in the works at US network The CW.

Skinny Dip is based on Carl Hiaasen’s 2004 satirical novel of the same name (pictured) and follows a woman who survives being thrown overboard by her husband after he attempts to murder her. She then teams up with retired policeman to seek revenge, after he saves her.

The show, which was previously in The CW’s 2018 pilot cycle but failed to secure a pick-up, is being produced by Keshet Studios and is being written by Russel Friend and Garrett Lerner.

The CW version had starred Matt Barr and Ben Aldridge, and was also from Keshet Studios with CBS Television.

Quibi has been on a commissioning spree recently as it prepares to launch next year, with projects including a workplace comedy from The Odd Couple star Thomas Lennon and two daily news shows targeting millennials from NBC.

A reboot of Warner Bros’ 1993 movie The Fugitive and a horror show from Steven Spielberg are also among hundreds of hours of content to have been ordered.