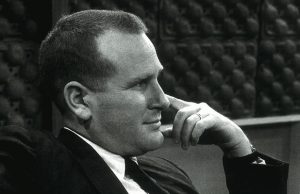 NATPE founder and former president Lew Klein has died at the age of 91.

News of Klein’s passing was confirmed by NATPE chairman Andy Kaplan, who said in a statement:

“It is with the deepest regret that we inform you that Lew Klein (91), NATPE’s founder and guiding light, has passed away. Lew was the soul and inspiration for NATPE and was tireless in his work and support of both NATPE and the NATPE Foundation, which he founded and served as president until his passing.

“Our condolences go out to Janet, Lew’s wife, who was by his side for a lifetime and always present at NATPE events, and to Lew’s entire family.  We will dearly miss his wise counsel, smiling face and his class. He was one of a kind.”

Klein  started his career in the 1950’s in the programming department of WFIL (now WPVI) in Philadelphia.

The first formal NATPE meeting was held in May 1964, evolving into a major fixture in the TV landscape.

From 1984 to 1993, Klein was President of Gateway Communications, Inc., which owned four CBS affiliate stations in New York, Pennsylvania and West Virginia.

He was also the executive producer of the popular dance show American Bandstand and of the award-winning series Frontiers of Knowledge and College News Conference.

Klein also held the position of Adjunct Professor at the School of Communications at Temple University in Philadelphia for 65 years.

He is survived by his wife, Janet, his children Ellen and Stephen, granddaughter Anna and her husband, John, and great-grandchildren Oscar and Miriam. A memorial service will be held at a date to be determined.