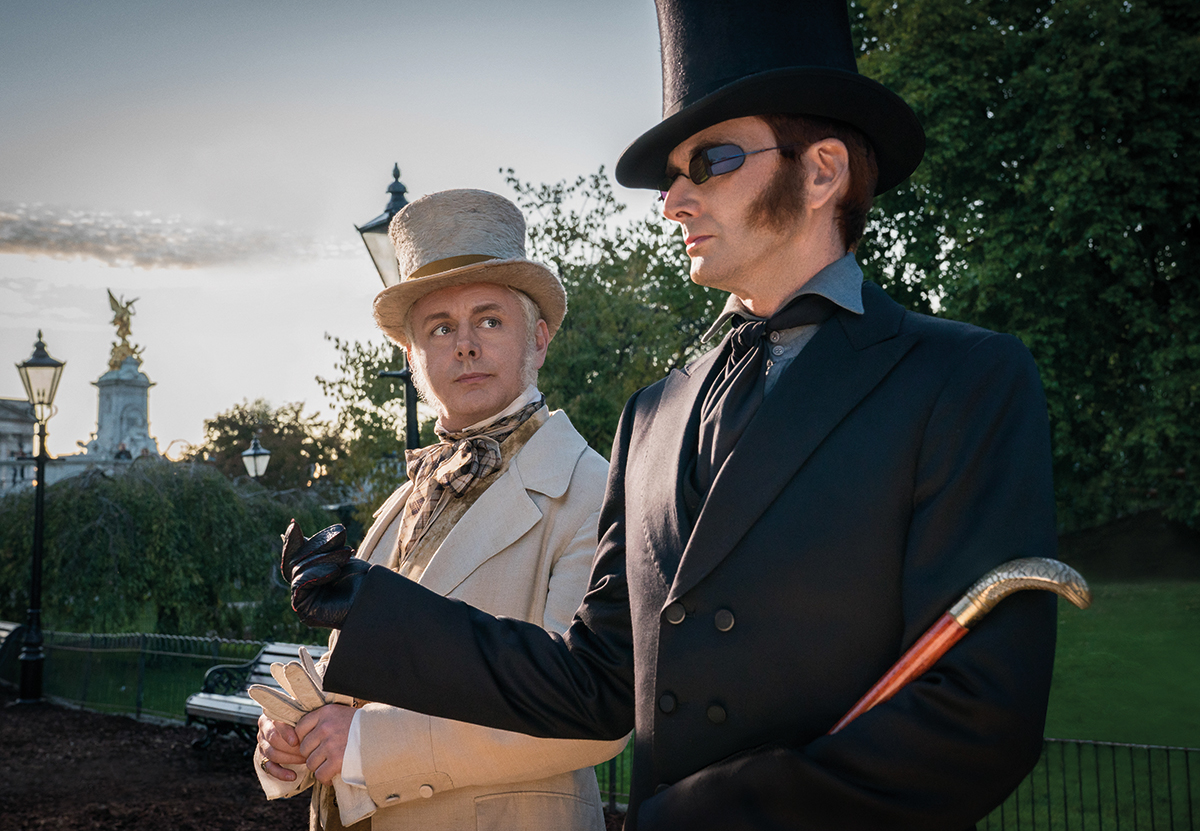 Ten years ago, it would have been inconceivable to adapt Neil Gaiman and Terry Pratchett’s 1990 fantasy novel Good Omens for the screen.

Written “as a bit of fun” between the two friends who “weren’t famous at the time”, the book finds angel Aziraphale and demon Crowley trying to prevent the End Times. An adaptation of the book – which has always been notoriously challenging to actualise with countless TV writers turning down the job over the years – was Pratchett’s last request before his death in 2015.

Honouring his wishes, Gaiman – whose oeuvre includes the likes of American Gods and Coraline – began work on the script a week after the funeral, embarking on a two-year process that “trumped everything else”.

Although a price-tag for the big-budget adaptation has yet to emerge, the David Tennant and Michael Sheen-fronted Good Omens – the first co-production between BBC Studios and Amazon Studios – is a technicolor feast for the eyes, elevated by state-of-the-art tech that creates an immersive and otherworldly experience for audiences.

“Years ago, you wouldn’t have seen TV platforms willing to take a risk like that, putting this much money in,” explains BBC Studios’ comedy head Chris Sussman.

“It would have been a film, but this is a hard story to do as a film. And there wouldn’t have been the technology to do it. It’s a timely course of events to have made it now.”

While much has been said about the release strategy for the show, which sees Amazon debut the six-part series on 31 May with BBC Two following at least six months later, Sussman says the producer couldn’t have asked for a better creative partner.

“There are some new paths to forge, but Amazon have been an incredible partner. They’re very good at backing creatives and they let you make the show you want,” he tells TBI.

“The fact that Neil has been involved so heavily in everything, showrunning right from the start, has given them huge faith in this.”

Amazon’s backing has also enabled the show to be one of the most premium efforts to come out of scripted at the BBC in the last decade. Executive producer Rob Wilkins reckons the production’s special effects have even surpassed films such as Peter Jackson’s Lord Of The Rings trilogy, which is also being adapted for TV by Amazon.

“If you look at Lord Of The Rings on the big screen now, you can see where certain things are stitched together. You won’t see that with Good Omens,” he says of the trilogy.

“We’re now at that point with CGI where it is entirely believable. It’s the first time in history where TV budgets are at that level.”

Indeed, what is evident across the footage, seen by TBI, is that CGI and storytelling is integrated in a fresh new way.

“In TV, it used to be a few years ago that the CGI shot would be the spaceship and then you cut inside to the hard set,” says director Douglas Mackinnon. “Whereas now, we have a [CGI] spaceship that lands in a field and flies off again. It’s just part of the story.”

Wilkins adds: “It doesn’t take over the story or jar you – you don’t step out of the narrative, even for 10 seconds, as the CGI is played to you. It’s completely immersive and it’s so much more beautiful and precise.”

“The book is the glue”

The creative team is upfront about the fact that, although the show is indisputably loyal to Gaiman and Pratchett’s source material, liberties have been taken to elevate the narrative.

“That character isn’t in the book but we needed him to be around for storytelling reasons. Very often an adaptation suffers because a book is written with the voice of the reader in mind, whereas we have to expand that onto the screen.”

Elsewhere, while Shakespeare is mentioned once in the novel, the English writer gets an entire sequence shot out of London’s Globe Theatre in the show.

In addition, Gaiman has written a half-hour explanation of Crowley’s backstory at the beginning of the third episode that is completely original. “But the fans of the book will see that as a treat rather than a bad diversion,” assures Mackinnon. 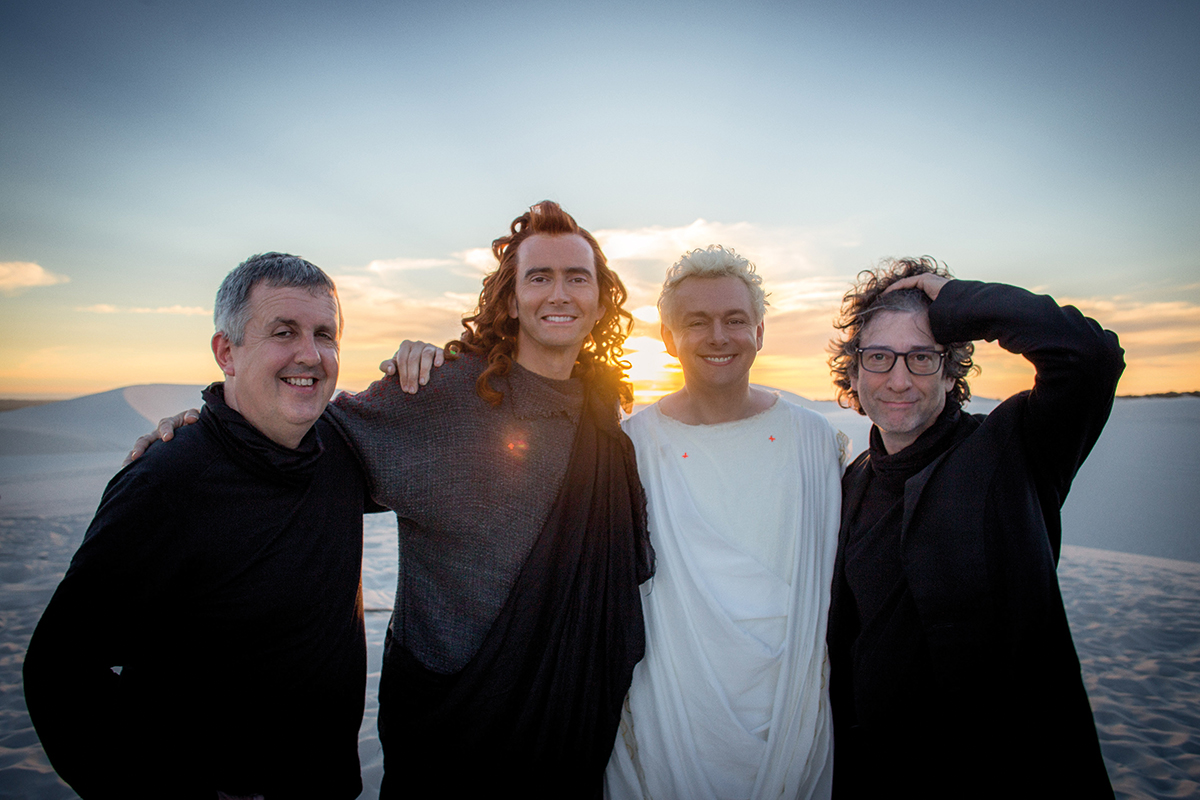 Lead stars Michael Sheen, who plays angel Aziraphale, and David Tennant, a demon named Crowley, tell TBI that with Neil Gaiman on board, the TV adaptation was able to be comfortably creative with scenes that enhanced the source material.

“There’s a fairly major section at the beginning of episode three, which in a series of 10 or so scenes we see the development of the relationship between Aziraphale and Crowley from the Garden of Eden, all the way through the history of the world, up to the present day,” says Sheen.

“It’s a major addition from the book and it was the scene we enjoyed the most.”

Tennant adds: “It’s very much in the spirit of the book, but that’s the good thing about having Neil involved. This world is so unique and it’s such an unusual voice that if anyone else was to do it, it would somehow be normalised.

“Anyone else adapting this script would just naturally have made it more sensible, but because we’ve got Neil there it maintains all the exuberance of the originals, even in those new sections.”

However, with Amazon on board and a global audience in mind, the stars admit that there were some taste tests administered.

“There’s one joke in it that became a little temperature-taker,” says Sheen. “There’s a bit where Jon Hamm’s character makes a little joke about Jeffrey Archer’s books, and we were like ‘no one’s going to get this outside of the UK’, but when we were at Comic-Con in San Diego they showed that clip and there was a huge laugh.”