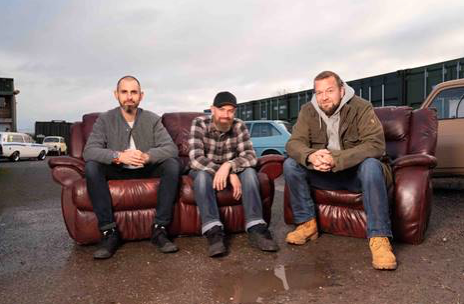 The series, which is produced by October Films, follows three best friends into the world of international car ‘flipping’ – where cars are revamped and resold for profit.

Lazy Boy Garage will TX on Dave in February 2019 and will also be available on UKTV Play.

McVey said: “My history of buying used cars is patchy at best, so I really wanted to commission this show to learn how to avoid making any more costly mistakes. Watching a vintage VW in a ball of flames on the hard shoulder of the M40 is a mistake you only want to make once and hopefully one that Dave viewers will never have to make!”

Gareth Cornick, executive producer for October said: “It might seem ridiculous, but by using the internet and never leaving the garage to bring in the cars and the parts, the Lazy Boys are giving us a master-class in ‘How to – and not to – buy and sell cars’. For the viewers it will be an exciting, fun, eye-opening show that the Boys hope might inspire a new generation of car flippers!”

Dave channel director, Luke Hales, added: “We have a long history of brilliant motoring shows on Dave and this is no exception – the cars the Lazy Boy Garage team are finding are out of this world – or at least out of this country. We hope the Dave viewers enjoy following the team as they hustle to hunt down, restore and sell-on some brilliant cars.”