Titles with recent premieres dominated France’s demand lists across digital originals and overall programming, with The Man in the High Castle and Riverdale taking top spots. 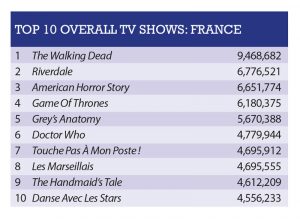 France’s overall list, which measures demand via ‘expressions’ such as file-sharing and social media posts for programming that did not first appear on streaming platforms, was topped by The Walking Dead, Riverdale and American Horror Story.

After the record-breaking premiere of its eleventh season in the UK, Doctor Who is also generating demand across the channel, with near 4.8m demand expressions drawn in France.

Other popular programming in the territory includes French reality series such as Les Marseillais and Danse Avec Les Stars. 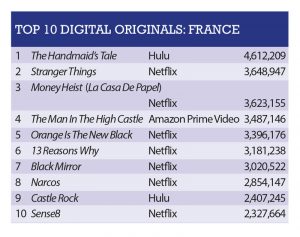 France’s digital originals list was topped by The Handmaid’s Tale,despite the fact that it finished airing its second season in early July on Hulu.

The October season three premiere of Amazon’s The Man in the High Castle also made an impact drawing near 3.5m demand expressions.

Other popular titles include Stranger Things, which currently has no release date for season three, La Casa De Papel and 13 Reasons Why.

Orange Is The New Black received near 3.4m demand expressions after the launch of its sixth season at the end of July. Netflix has confirmed that the title’s seventh season, due to launch in 2019, will be the show’s last.