Fremantle ties up with Fuji TV on Little Presenter

Fremantle has agreed a deal with Fuji Television to represent Little Presenter, a comedic entertainment format which shows the world through the eyes of children. 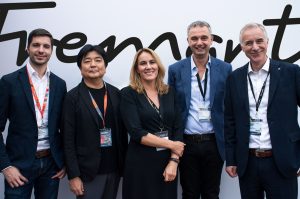 Each episode will see kids take on serious questions such as ‘how do we live in a world without conflict?’. They then spend time with experts on the topic, before presenting their own findings in speech in front of a studio audience.

Vasha Wallace, executive VP of global acquisitions and development at Global Entertainment, Fremantle, said: “We have a long and successful relationship with Fuji Television and to date we have seen 95 different launches of the Fuji and Fremantle shows around the world.

“We are excited to be working on Little Presenter to bring this unique and endearing format to global buyers, starting with our launch at this years’ MIPCOM. Already we have had a hugely positive response to Little Presenter, it’s in an area which is really resonating with audiences and broadcasters alike and as a result we are looking forward to rolling this format out around the world.”

So Fujinuma, VP and producer at, Fuji Television Networks, added: “This format’s universal theme, children’s curiosity, will appeal to broadcasters worldwide, and I strongly believe that it will be adapted in many countries thanks to Fremantle’s network.

“Since the international success of Hole In The Wall, Fuji Television and Fremantle have maintained a strong relationship. I personally had the chance to co-develop as producer on Total Blackout, which was sold in 20 countries. I’m looking forward to creating more great formats with Fremantle.”