BBC Studios has appointed Joe Evans (pictured, right) as creative director of development and Eddie Evelyn-Hall (left) as head of development of its entertainment and music team, home to shows such as Strictly Come Dancing, Eurovision and Glastonbury. 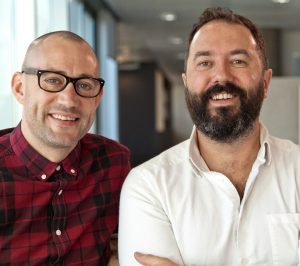 Together they will work with the existing creative team to devise new entertainment programmes and formats for UK and international broadcasters and digital platforms.

Evans was previously director of development at Endemol Shine’s Tiger Aspect, where his credits include Streetmate for Channel 4, Jack Whitehall: Travels With My Father for Netflix and Armchair Detectives for BBC One.

Previously, Evelyn-Hall also served as talent producer at Syco Entertainment, collaborating with production companies and existing shows such as X-Factor and Britain’s Got Talent. His production credits include Got to Dance and Pineapple Dance Studios for Sky 1, The Voice UK for BBC One and The X-Factor and Xtra-Factor for ITV1 and ITV2.

Suzy Lamb, MD of BBC Studios Entertainment & Music, said: “Joe and Eddie are exceptionally creative developers and programme makers with fantastic relationships with UK and US commissioners and talent. They will make a brilliant addition to our BBC Studios team.”

Evans added: “I’m delighted to be joining Suzy and the BBC Studios team at this very exciting time. They already have a worldwide reputation for creating and making great programmes and I look forward to working with Eddie and the development team as we devise new hit formats for the company.”