BBC Studios boss Tim Davie revealed during a keynote speech at the IBC conference in Amsterdam today (13 September) that the trio will develop and fund a slate of high-end, short-form drama and comedy projects. 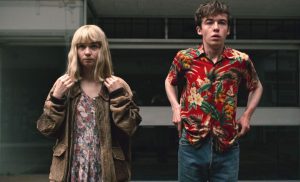 The End of the F***ing World

The End Of The F***ing World (right) indie Clerkenwell will produce the titles, with the BBC and film and TV investment group Anton financing the projects.

Titles will be produced for digital and linear platforms, with additional funds set aside to self-commission.

BBC Studios and Anton are partners in The Drama Investment Partnership: a £150m war-chest launched in 2017 to secure investment in premium British drama with international appeal.

Davie said: “This is an exciting and significant long-term development partnership for premium short-form where we are backing Clerkenwell’s creative excellence in a number of ways, from co-funding of development through to self-commissioning of multiple projects.”

Curtis will be the BBC’s head of development for factual entertainment. At Voltage, he was development executive producer since 2015. He has developed competitive formats such as An Hour To Save Your Life for BBC2.

“They both have strong reputations for delivering ground-breaking, thought-provoking factual entertainment, with warmth, wit and purpose, and I look forward to working with them and seeing what they create next.”