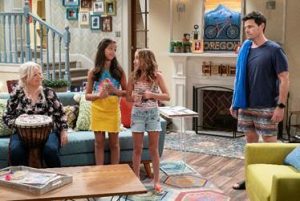 The series follows middle schooler named Sydney Reynolds and her single dad Max as they navigate the challenges of growing up.

The title is a production of It’s A Laugh Productions for Disney.

Jonas Agin, VP of original series at Disney Channel, said: “With Sydney to the Max, Mark Reisman has given us a series full of heart, humor and honesty.

“On one level, it explores the beautifully complex relationship between a girl and her father and a boy and his mother.  On another level, by existing in two distinct eras, it highlights how the smallest experiences of childhood have the biggest impact on who we become — and how every generation, despite its unique challenges, is filled with the universal truth that kids will always face the same joys, fears and excitement as their parents did.”