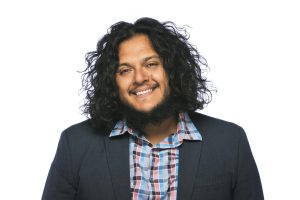 Sonar Entertainment is developing a new comedy-travel series with comedia Felipe Esparza based on making bad decisions along the US/Mexico border.

Crossing Over – Bad Decisions Along the Border sees Esparza tackle the debate around ‘The Wall”, where the Mexico/US border lies, and give it a comedic twist.

In this multi-part series, Esparza and his band of fellow comics hit the road for a tour of the hidden side of the US/Mexico border, bringing unconventional riffs and an immigrant perspective while offering hilarious and often poignant glimpses of a part of America and Mexico that elicits no shortage of strong opinions but that most people actually know very little about.

Along the way the crew uncovers quirky businesses, wild adventures, unlikely characters, insane plans, and great food – blowing up stereotypes and breaking down political walls to bring us together in a way that only humor can.

“Felipe Esparza is one of the brightest stars in all of comedy,” said Andrea Gorfolova, president of kids, family and factual for Sonar Entertainment. “His singular perspective, sometimes raw and always spot on, combined with his unmatched comic instincts, make him the ideal talent to take us on this unforgettable tour.”

Esparza said: “I’m excited to be working on this project because it explores something very close to my heart. I’m an immigrant, too, and I see myself in a lot of these people and their families. This show will focus on the human stories on all sides of this border wall issue and I hope to also bring some humor and light to this topic wherever possible.”