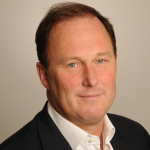 Van Der Hoeven became MD non-scripted in 2015, working on successful formats such as First Dates, Adam Looking for Eve, World’s Most Dangerous Roads, Ilse’s Veranda and Temptation Island.  He came to WBITVP NL through the 2015 Eyeworks acquisition, having previously worked at Holland Media House and IDTV.

Musch-Elzinga has served as business director at Blazhoffski for four and a half years, prior to which she was head of productions, responsible for shows including Hello Goodbye and Who Do You Think You Are?.

Commenting on the promotions, Ronald Goes (pictured), EVP and head of WBITVP, said: “Michiel and Nelsje each have excellent track records in the industry at large and for Warner Bros., so we are thrilled that they have taken up these new responsibilities in the Netherlands.

“It’s always a real plus to be able to grow talent and give greater responsibilities from within the company and their appointments reflect our ongoing commitment to bringing exciting, innovative television to both local and international audiences.”