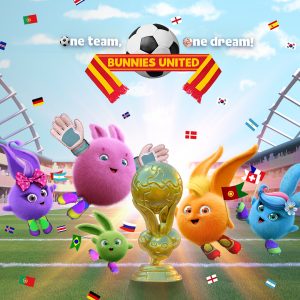 All told, the show has reached more than 160 territories since it launched two years ago.

In Canada, DHX Television has picked up the first two seasons of the show (52 x 3.5 mins) for its French and English-language preschool networks, Family Jr. and Télémagino. The show will air in July, ahead of the launch of Sunny Bunnies toys in Canada during autumn 2018.

In Brazil, the show has been picked up by GloboSat for kid’s channel Gloobinho.  The show already has some profile in this market via the Sunny Bunnies YouTube channel and on the PlayKids SVOD app.

The Sunny Bunnies are five beaming balls that can appear anywhere there is a source of light, from sunshine to moonlight. In each episode, they bring their fun and games to a different location — a circus, a sports stadium, a park — embarking on mischievous adventures.

Media I.M. co-founder Irina Nazarenko said: “In the two years since its launch, Sunny Bunnies has achieved a global reach of over 160 territories with licensing deals in the US, Europe and Latin America, and now we are preparing the roll out of the first ever merchandise in late 2018. We really can’t wait to see them bouncing off the shelves of key retailers in North America and Australia.”