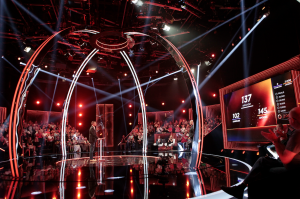 Germany’s ProSieben has picked up Banijay Group’s interactive, studio-based entertainment format, All Against 1.

Brainpool, a Banijay Group company, is producing a local version of the series for ProSieben. Known in Germany as Alle gegen Einen, the show will consist of four live episodes, which will broadcast later this year with Andreas Viek at the helm as executive producer.

All Against 1 is a format where the contestant and viewers are all asked the same questions, based on the outcome of a variety of unique and outlandish experiments, ranging from everyday science to crazy sports dares or spectacular stunts.

The answer is literally anyone’s guess – so everyone in the country can play. The contestant answers alone, while the average of the viewers’ responses via the app determine the nation’s collective answer.

Whoever’s answer is the closest banks the money at stake. But there’s only one way to win the jackpot: be closest to the answer for the final question.

Peter Langenberg, COO, Banijay Group said: “With interactivity at its heart, All Against 1 has been a proven success across Europe and this latest commission highlights the format’s clear global appeal. As the series continues to pick up momentum across Europe, we look forward to exploring its potential in other regions.”