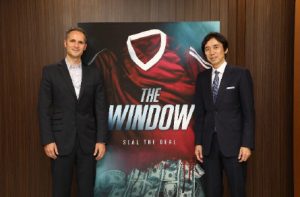 Japanese broadcaster Fuji Television has unveiled plans for a ground-breaking scripted co-production with ZDF Enterprises called The Window. Created by UK writer James Payne, the 10-part series will be set in London during the football player transfer window that takes place before the start of each English Premier League season.

The story will focus on the players, agents, club owners and journalists caught up in this frenetic period when multi-million dollar transactions take place as clubs seeking to secure the best talent. Commenting, Fuji TV senior executive managing director Toru Ota said: “Due to the current waves of video streaming technology, the market for the drama industry is shifting towards a golden age, which is expanding beyond national borders. By renewing our global strategy, and through sharing the DNA of Fuji Television’s drama production capability with our partners in Europe, I believe this is going to be a new challenge for us to produce a Japanese drama series with the hope of success in the global market.”

Robert Franke, VP ZDFE.drama for ZDFE, added: “The Window is a thrilling human dram that does for football what House of Cards did for politics. It is a unique blend of Machiavellian horizontal storylines where moral right and wrong blurs along the lines of ambition and willingness to do whatever it takes to succeed.”