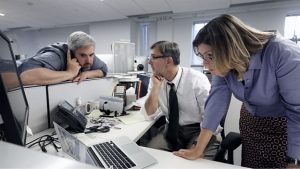 BBC Two has picked up Showtime’s The New York Times: The Fourth Estate, due to premiere in the UK in June.

The title will take audiences behind the scenes of The New York Times and follow the inner workings of one of the most prolific American media outlets during the first 12 months of Donald Trump’s presidency.

From the first few days of Trump’s inauguration, to accusations of ‘fake news’, four episodes will see filmmakers granted unique access on the ground with reporters, revealing the challenges, triumphs and pitfalls of covering a president who has declared war on the free press.

The Fourth Estate also looks at news and reporting in the digital age, and how journalism is having to evolve to cope with the development of social media and changes in the way and rate at which people consume news content on a nonstop 24-hour news cycle.

The title is a four-part series for BBC Two commissioned by Patrick Holland, controller at the channel, through the BBC Documentary Department under Clare Sillery, head of commissioning, documentaries.

It was produced by Liz Garbus and Jenny Carchman and is a Radical Media and Moxie Firecracker Films Production, in association with Impact Partners and Showtime Documentary Films.

Holland said: “This is a stunning series giving remarkable access to the New York Times editorial team during the turbulent early months of Trump’s presidency.

“At a time when so many of the mainstream media misread the mood in the USA and beyond, this series offers a candid, shocking and illuminating exploration of the shifting relationship between journalism and political power.”