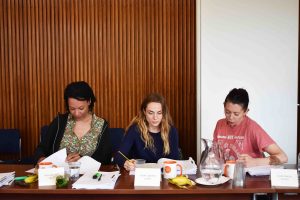 Women on the Verge read-through

The six part series will be co-produced by Horgan’s Merman and House Productions.

Women on the Verge is based on the best-selling book Woman on the Verge of a Nervous Breakdown, by Lorna Martin, which in turn was based on her Grazia column ‘Conversations With My Therapist’.

Kerry Condon (Better Call Saul), Nina Sosanya (Marcella) and Eileen Walsh (Catastrophe) star in the series, which is set to air across the UK and Ireland later this year.

The project was picked up in 2011 by Horgan, who has since been working with Martin to turn the subject matter into a half-hour UKTV original drama.

Horgan will also star in the show as Dr. F, alongside Condon, Sosanya and Walsh.

The series has been ordered by UKTV’s director of commissioning Richard Watsham and Steve North, genre manager for entertainment and comedy.

It will be directed by Annie Griffin with Gavin O’Grady as producer. Clelia Mountford and Horgan will executive produce for Merman, alongside Juliette Howell and Tessa Ross for House Productions. Pete Thornton and Joe McVey exec produce for UKTV.

Adam Collings, channel director for W added: “Women on the Verge offers a highly original, no holds barred take on a subject matter that will be instinctively familiar to the W audience.

“Taking the gloss of Sex and the City, combined with the brutal honesty of Girls, this is a project unlike anything else on British TV.”