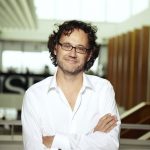 Captured will become a short form (20×10) digital series and Cherub a 10×45 minute TV series, as the first productions in the deal.

The deal will also include the 10×1 hour My Life With the Walter Boys, based on the Ali Novak novel. The development of further long form content is planned to follow in coming months.

Wayne Garvie (pictured), president, international production at SPT, said: “There is so much rich content in the marketplace written and published by adults and teens themselves. The number of young-adult book titles has more than doubled in the last decade and the popularity of self-publishing sites, like Wattpad, have created a surge in original young-adult content.

“It’s an excellent time to be adapting these characters and stories for video. We look forward to partnering with the expert team at Komixx on our first venture into this exciting genre.”