Is this Europe’s next super-indie trio?

Mediawan has ambition and the cash, but what is the strategy? France’s newest production-distribution group has closed six takeover deals in the past year, and is now looking beyond its Gallic foundations. Pascale Paoli-Lebailly talks with co-founder Pierre-Antoine Capton about the plans to grow. 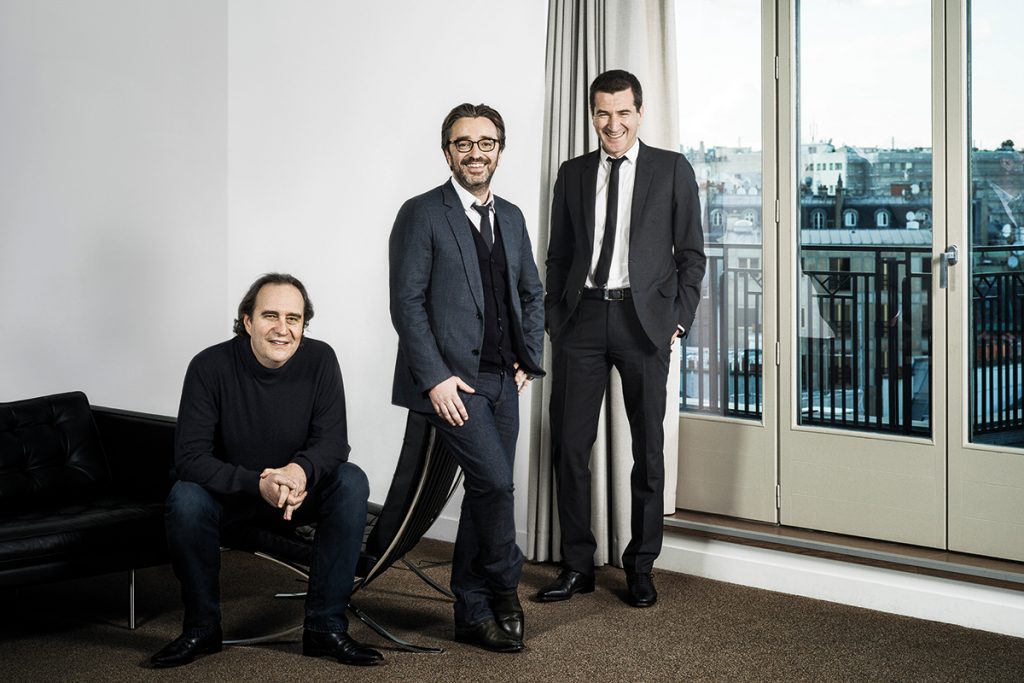 By acquiring a 77% share of drama-orientated TV production group Makever in mid-March, Mediawan got its hands on the fourth largest scripted producer in France.

The deal for the owner of Makingprod, Scarlett, Verna Production, Mademoiselles Films, Love My TV and Alauda Films was also the fourth that France’s fastest growing new production and distribution consolidator had completed.

It filed for an IPO in 2016 after having launched with objective to become the “top European independent platform for premium content”. The group has already grabbed half a dozen animation, drama and documentary production companies in France, including Groupe AB and the French TV business of Luc Besson’s movie firm, EuropaCorp.

Now valued at €360 million, Mediawan is close to reaching a critical mass in the French market, and is being eyed favourably by institutional investors. Its share price currently oscillates at between €12 and €13, according to French finance website France Bourse, which adds it has grown 30% since the start of 2018.

“Our purpose is to develop premium European content, both in production and distribution, and this perfectly matches with animation, documentary and drama,” Mediawan’s talent ‘headhunter’ and chairman Capton tells TBI.

Through his entertainment and format company 3ème Oeil, the third largest in France behind Banijay and Lagardère Studios, the producer owns 6.69% of Mediawan. Pigasse’s media group, Les Nouvelles Éditions Indépendantes, and Niel’s holding vehicle NJJ Presse are also shareholders, each also owning 6.69%. However, Capton’s prodco has not been brought in to the ensemble.

“Whatever the platform is, and as long as the financing is ensured, we’re aiming at developing our brands,” he says. “Films become series, kids animation programmes turn into movies, and the most important thing is to be able to create strong properties that strengthen our rights catalogue.

“We aim at becoming an unavoidable player in all genres of programmes, and for all kind of broadcasters and platforms such as Netflix, Amazon and Apple.”

To that end, it was with the acquisition of a profitable library of 12,000 titles that Mediawan kick-started its business last year.

The 100% acquisition of Groupe AB for €280 million was an ideal tool to get into the market, as it owns the French-language rights to German series Babylon Berlin, as well a bunch of internationally-sold French programmes such as Black Spot (Zone Blanche from Ego Productions), whose exclusive worldwide SVOD rights went to Amazon.

AB has also developed a limited but solid production business, and operates a bunch of pay TV channels in France and Belgium.

This acquisition was followed last July by that of Clarke Costello & Co (CC&C), after the small documentary producer’s three co-owners sold 80% of their shares to AB. CC&C is behind the Apocalypse franchise, which rights holder France Télévisions Distribution has licensed into 165 countries.

In December, Mediawan launched exclusive negotiations to take a majority shareholding of animation studio On Kids & Family. The agreement should be finalised shortly.

Co-founded by animation and movie producers Aton Soumache and Dimitri Rassam, the Paris-headquartered On, which also has offices in Montreal, Luxemburg, Los Angeles and India, owns TV toons producer Method Animation (Miraculous) and feature film arm On Animation Studios. On has produced animation shows like Le Petit Prince and is now prepping a new movie, Playmobil.

Early 2018 has been equally as buoyant for Mediawan, which announced further acquisitions of companies that made revenues of over €50 million in 2017. 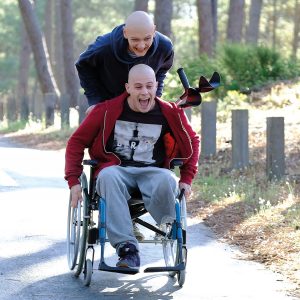 One deal saw the firm enter into exclusive talks to acquire a majority share in Makever, whose affiliates produce more than 30 programming hours each year, including Cherif for France 2, Kaboul Kitchen for Canal+ and Les Bracelets Rouges (left). The latter, adapted from Spain’s The Red Band Society format, averaged 5.7 million viewers for TF1 across its six episodes and will get a second season.

It also closed the deal for EuropaCorp Television’s French TV series business, which adds a library of 250 hours of series and TV movies shot both in French such as Les Bleus and No Limit and English (XIII, Flight of the Storks, Taxi Brooklyn), plus a 2018-2019 production line-up that is said to include a dozen projects and TV series. Among these is Les Rivières Pourpres for France 2.

That takeover was completed through a newly formed company, Storia Télévision, in which Mediawan owns at 80% and former EuropaCorp Television boss Thomas Anargyros has 20%.

“Thanks to these acquisitions, we have become the European leader in animation over just a few months, and the French leader for drama,” claims Capton.
“We are lucky to have the best creative talent and the best producers with us. This consolidation obviously aids our objective to become an independent leader for premium TV content in Europe. If new opportunities to integrate other talent rise up, it won’t be a problem, wherever the territory is.”

Above all else, Mediawan needs to continue at this pace. Its priorities lie in animation, documentary and drama, as well as the format and entertainment sectors, but its acquisition criteria is first “based on the talent and their production quality”.

Rumours of a potential acquisition of broadcast and radio group NRJ and/or international distributor Wildbunch are baseless, claims Capton. Instead, he says more generally: “All the companies that have joined the group will show strong growth in 2018 and the coming years. Our acquisition strategy is very ambitious. Like Matthieu Pigasse says, we have no limit to our investments.”

Indeed, speaking to French news portal BFM Business recently, Mediawan’s bosses even claimed “putting €500 million on the table would not be a problem”.

That financial capacity allows Mediawan to look beyond France. “We wish to associate with content producers in Germany, Spain and Italy,” Capton confirms.

A few months ago, the company missed out on the acquisition of Cattleya, the Rome-based producer of Gomorra and Romanzo Criminale, which ultimately went to ITV Studios last October. However, other opportunities are being studied, as Mediawan believes German and Italian TV series have never performed like they do now, and that in a post-Brexit Europe, having a pipeline of content from mainland Europe will be a boon.

“Those countries know how to tell a story and have all proven their international production capacity as well as their ambitions,” says Capton referencing shows such as The Young Pope (right), La Casa de Papel and Babylon Berlin.

“Together, we can do more have to target the international market and find new ways of financing projects,” he adds. “We’re considering all the creative talent worldwide.”

For Mediawan’s partners, expectations are high. Makever chief Matthieu Viala recently told Le Film Francais that he was enticed by the fact the buyer was French and the management trio experienced. Added to that was the guarantee of editorial independence and help with areas such as international development and global programme marketing strategies.

Assessing Mediawan’s first year with AB, Capton says synergies have been identified and new processes established: “We started to put the strategy we had defined with the management into practice. Existing activity has been strengthened and new projects launched. The new companies joining us this year will allow us to enlarge our sphere of action and operate more as an industrial group that builds on the assets of each of its parties.”

So far, Mediawan’s positive language and acquisitions strategy are appealing to investors. Being a SPAC, which allowed it to raise a lot of money without having to identify acquisition targets, means it has attracted twelve shareholders, from Sycomore Asset Management, which owns 20.99%, Amiral Gestion (10.49%), Deutsche Bank (4.57%) and JP Morgan GT Corporation (4.60%).

“We are very confident about Mediawan’s capacity to build strong properties and sell them to major platforms worldwide,” says analyst Babi Kulasingham from Midcap Partners-LCM.

“The content business was quite well financed before entering in production, there is no major risk and Mediawan should keep an organic growth of 5%,” he adds. Groupe AB’s pay TV activity is seen as “non-core”, but the financial prospects in production and distribution are fancied, while Mediawan’s overall matrix of collective acquisitions is seen as “coherent”. Kulasingham predicts Mediawan’s value will “double in the coming year”.

Full year 2017 financial results released March 22 show annual revenues (including AB on a nine-month consolidated basis) were €115.7 million on earnings of €25.5 million (see below). The numbers appear a good start.

However, competitors talk of the company as a “mysterious phenomenon”. Despite having well known industry figures such as former Canal+ CEO Pierre Lescure, Eutelsat boss Rodolphe Belmer and Facebook Europe’s Julien Codorgnou on its board and a solid management team, intrigue remains over its emergence and goals.

One competitor wonders about the overall purpose. “Convincing investors to give money to buy content companies is good,” they say, “but what is the strategy behind that and who is piloting it all?”

Others question the coherence of the acquisitions. “They talk about building a European premium content strategy, but all these companies are very French,” one professional observes, adding Mediawan has not really branched out in Europe yet.

“Is it a good equity story aimed at creating external growth and betting on the boom in demand that was created buy new entrants worldwide, or is it a real industrial project aiming to create value with distribution, coproduction and digital developments?” they add.

There are also suggestions the company itself is gearing up for a sale within five to ten years – something Capton denies. “We have on a long-term strategy, with no sales objective,” he says. “We have already attracted investors who are here for the long-term and many new ones are considering accompanying us.”

Producers also point to the need for collaboration. “Mediawan is currently piling up small and bigger companies, but it needs someone to drive and organise the group,” says one producer.

“The positive point will be when it will hires someone to make the link between the subsidiaries, integrate them and select the future European acquisitions as part of the established strategy.”

France, and the wider international TV business, will be watching with interest.

Paris-listed Mediawan secured revenues of €115.7 million on EBITDA of €25.5 million (including Groupe AB on a nine-month consolidated basis). On a pro forma basis, those numbers become €163.8 million and €37 million. Though financial statements showed a small underlying net operating loss, analysts are convinced the business will become a significant international player.