Beta Film has secured worldwide rights for the high-end French scripted series Victor Hugo – Enemy of the State, produced by Quad, the company behind box office hit film The Intouchables. 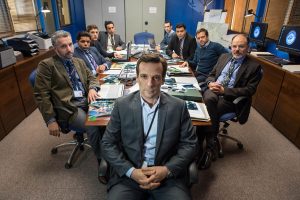 The four-hour mini-series, directed by Jean-Marc Moutout (The Bureau – pictured) is currently being shot around Paris, northern France and the Dordogne and will be wrapped mid-May.

Beta is introducing the France 2 production to buyers at MIPTV in Cannes for the first time. Best known as a novelist, this series takes an intimate look at Victor Hugo as a private person, his family life, his tumultuous love life, his doubts, beliefs and political commitment.

Moutout says: “When the series begins in 1848, Victor Hugo is well-acquainted with fame and fortune. At 46, he is a member of the Académie Française, has risen to the ranks of nobility … and is a royalist. When the series ends, three years later, he is a fugitive with a price on his head … and republican. I want to show change in Victor Hugo’s awareness and commitment, plunging into the heart of this era and life of this great man. Both are linked, since Hugo abandons literature for the political fight.”

Hugo is best known as the author of Les Misérables. While he was writing it, France experienced one of the most dramatic periods in history, the shift from Republic to Empire, from the 1848 revolution to the coup d’état of Louis Napoleon Bonaparte. Victor Hugo is portrayed by Yannick Choirat while Isabelle Carré is his lover Juliette.