Australia’s Arenamedia has hired former ABC commercial boss Robert Patterson (pictured), who left the pubcaster in a restructure last year, as one of three new hires, with another made for UK projects. 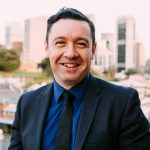 Patterson will take charge as executive producer over a full slate of Arenamedia productions.

The move arrives after he departed ABC after two decades as the ABC restructured its TV and radio divisions. Numerous other senior execs and lower level staff left during the changes.

At the ABC, Patterson was the director of its commercial division. He began his career in the music industry, and has held a range of roles with ABC.

Rachel Connnors has also been drafted in at Arenamedia. She will produce and oversee Arenamedia projects in the UK.

She is a UK-based Australian producer whose films have screened in official selection at many international film festivals including Berlin, Edinburgh and SXSW.

Louise Gough will join as head of development, where she will oversee the company’s commissions across film and television content. She joins from Screen Australia where she was development executive for story.

Patterson said: “I am delighted to join Arenamedia to work with such a great team and amazing content. With so many incredible projects in development it is a privilege to work alongside the wonderful creatives, production partners, platforms and funding bodies behind each of them.”