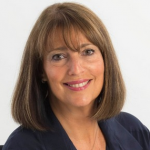 McCall (pictured) was bullish despite the numbers, saying there was “no doubt that ITV’s operational performance in 2017 in a challenging environment was strong”.

Under McCall’s predecessor, Adam Crozier, ITV diversified away from its broadcast advertising business model and into content production, distribution and ownership, which has helped the company remain in growth.

McCall is now looking to the next phase of this, undertaking a review of what ITV will look like in three and five years’ time.

“We are very focused on our strategic refresh,” she said. “This will enable us to define a clear strategy and priorities that will highlight the opportunities and address the challenges that we face in an increasingly competitive media landscape. This project is well underway.”

The move will likely continue Crozier’s work, hence the phrase ‘refresh’, but alter, change or add to certain elements or specific initiatives.

ITV’s core broadcasting and online unit was down 3% to £2.08 billion – a fall of £57 million. Earnings before interest, taxation and amortisation were £599 million, down from £642 million the previous year.

There was good news on the production and distribution front, with total revenues at ITV Studios up 13% to £1.58 billion. Earnings were flat at £243 million.

ITV pointed to new dramas such as Liar, Bancroft and Little Boy Blue, new entertainment shows The Voice, The Voice Kids and Five Gold Rings and a number of returning shows such as Broadchuch, Love Island and Ant & Dec’s Saturday Night Takeaway as successful on British television, but noted Fearless, The Nightly Show and Bigheads had not been and would not return this year.

ITV also noted the closure of pay TV channel Encore would “impact” pay revenues in 2018, but would allow the broadcaster to distribute box set-style content across more platforms.