Mark Gordon’s first major hire since becoming president of Entertainment One (eOne) is that of CAA agent and co-head of television Peter Micelli.

The news comes less than a month after Gordon took on his new post after eOne fully integrated his prodco into the wider business. The changes saw film chief Bertram take on his new role and John Morayniss leave after a transition period. 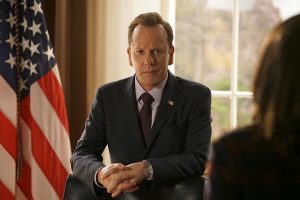 Gordon and Micelli have history, with the latter previously representing The Mark Gordon Company while at CAA. Together they turned Aaron Sorkin script Molly’s Game into a feature film, and he also packaged ABC’s Designated Survivor (right) and new straight-to-series order The Rookie.

At eOne, he takes on a newly created role overseeing the firm’s TV and digital content businesses. This will include setting strategy and sourcing M&A opportunities.

“Pete was my agent for four years, during which he helped me grow The Mark Gordon Company into a trusted destination for producers, talent, and their passion projects,” said Gordon.

“He is an expert at building media companies to become leaders in an increasingly digital and global landscape, and I am thrilled to have him on our team as we continue to fortify and evolve eOne’s worldwide content business.”

“For the past two decades, I have worked on behalf of many of the world’s most talented storytellers, helping create opportunities for their programming to be seen around the world,” said Micelli. “I am thrilled to partner with Mark and Steve to build a next generation studio, where artists have greater creative control of their IP and more opportunities to get their projects to production.”