SVOD service use is not led by demographics – Kagan

Media research group Kagan has found that digital entertainment behaviour, rather than demographics, best identifies the profiles of current and future users of SVOD services.

The online survey, which consisted of over 1000 internet users in the UK, shows that the make-up of SVOD users tend to skew towards the younger populace, with 50% under the age of 40, while 30% SVOD users are adults at 50+.

But as the survey found, demographics aren’t the largest factor in shaping the SVOD user population. Transactional video services that offer online video rentals and purchases show an even stronger correlation with SVOD use.

The survey shows that 86% of adults who rent online videos at least once a week, and 52% of those who are infrequent renters (less than once per week) are also frequent SVOD users. 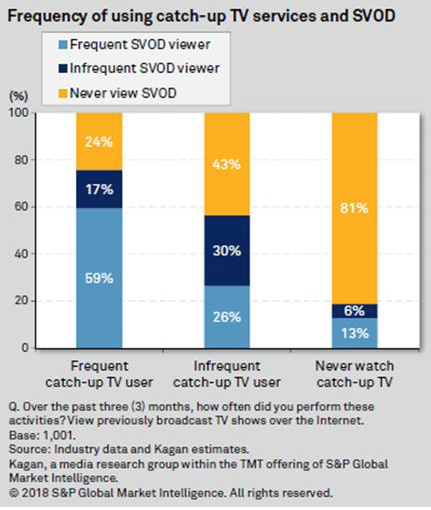 Among those who access an online catch-up TV service at least once per week, 59% are also frequent users of online subscription services.

Among those who never view previously broadcast TV programs online, only 19% have an SVOD subscription.

Users who do not access pay TV operator video content online tend also not to have an SVOD subs – with 29% claiming to do so.