Channel 4 (C4)’s Ian Katz has appointed Kelly Webb-Lamb (pictured) to the new role of deputy director of programmes and head of popular factual, as changes to the UK broadcaster continue. 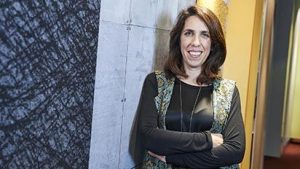 Katz, who was a news executive working for the BBC and the Guardian newspaper, effectively replaced C4’s former chief creative officer Jay Hunt.

In the new role, Webb-Lamb will work alongside Katz to develop C4’s overall creative strategy and will lead the channel’s on-screen diversity and inclusion strategy.

The factual entertainment, features and daytime commissioning teams will report to Webb-Lamb, in addition to the creative diversity team headed by Angela Chan and the nations and regions team headed by Deborah Dunnett.

The news comes as C4’s features head Gill Wilson winds down her role to depart in April. It has been stated that she will be departing to take a career break and spend time with her family, with the decision being made at the end of 2017 before Katz joined.

C4 will now be recruiting for a head of features and head of factual entertainment, with both roles reporting to  Webb-Lamb.

Katz said of Webb-Lamb’s new role: “Kelly is one of the pre-eminent creative leaders in television and has a unique ability to find the sweet spot where public service themes meet popular ideas. She has a track record of championing new ideas and nurturing diverse new voices and I’m delighted she’ll be working alongside me to develop Channel 4’s creative strategy.

“Gill has made an immense contribution to the success of Channel 4 over the last five years and leaves the features slate in very strong health. In the short time I’ve worked alongside Gill I‘ve been bowled over by the passion she has for her programmes.

“She will be much missed and I am particularly grateful to her for agreeing to stay on at the channel for a few months to help me make the transition to Horseferry Road.”

Channel 4’s future remains in flux with the British government determined to move it from its traditional London home to another city, with Leeds, Birmingham and Bristol all touted as new bases.