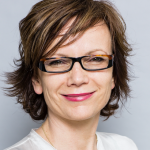 De Mardt (pictured) will be president of the Cologne-based company, which will form part of the Paris- and LA-based Gaumont.

The office opens on July 1, at which point she will report to Gaumont’s Vice CEO, Christophe Riandee.

While at WBITVP Deutschland, de Mardt was director of fiction and film.

She had joined Eyeworks while MD and shareholder of Cologne Films and Gemini Films, which Eyeworks bought in 2009.

She has also executive produced major ZDF dramas such as the long-running Marie Brand series, and the Friesland TV movies and Wilsberg telemovie series.

“In Germany, Gaumont will continue to invest heavily in the development and production of premiere drama programming, working together with first class writers, directors, actors and creative executives,” said de Mardt.

“As we have done in the US, we are now establishing Gaumont in Germany to produce local content in the local language, and Sabine is a well-respected development, production and creative executive with a highly successful track record who will now lead these efforts,” said Gaumont CEO Sidonie Dumas.

“With today’s audiences around the globe now used to watching shows in the original language, we also anticipate strong demand for these programmes from our overseas partners.”