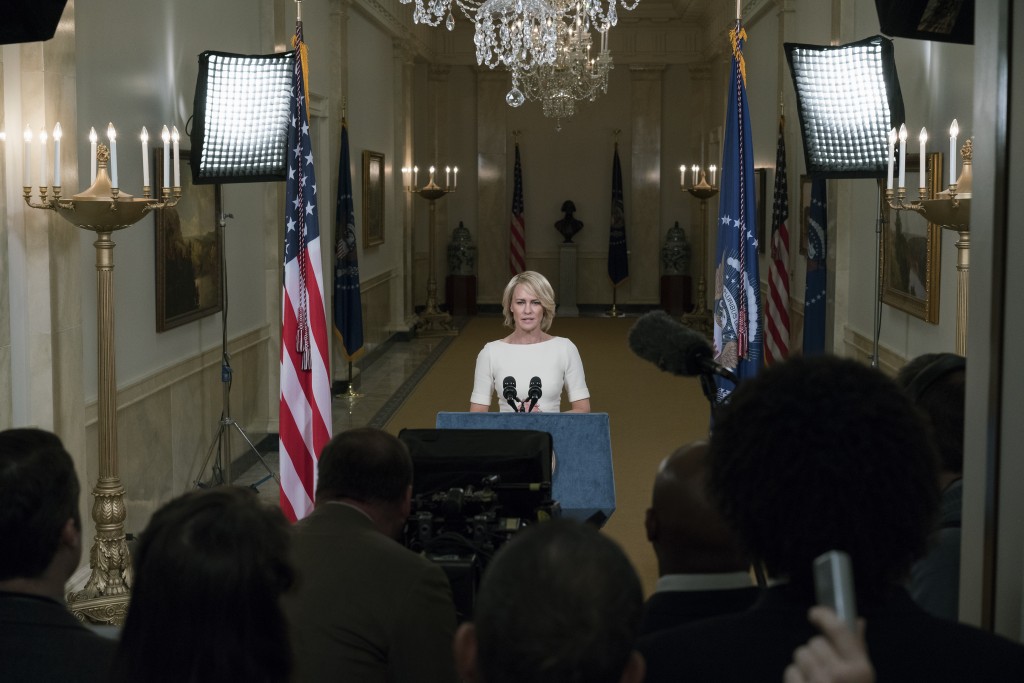 After some deliberation on the status of House of Cards (HOC) season six, Netflix content chief Ted Sarandos has confirmed that production will go on for the final season.

Last month, the sixth season was put on an extended hiatus as management attempted to resolve the fallout of sexual harassment claims made against Kevin Spacey.

Sarandos has now confirmed that filming will resume in January 2018 with Robin Wright (pictured) taking the lead. Spacey will no longer be involved with the project after Netflix cut ties with the actor and producer.

Netflix programming chief Sarandos said the season will finish with eight episodes, slightly shorter than normal for the title.

Speaking Monday at UBS’ Global Media and Communication Conference, he added the order would provide “some closure to the show for fans”.

Any future plans for series were cancelled in October after Star Trek: Discovery star Anthony Rapp claimed that Spacey made sexual advances toward him at the age of 14.

Netflix and Media Rights Capital, the title’s producer, are currently in early stages for a HOC spinoff.

Sarandos told delegates at the conference that Netflix would produce 50 original series globally this year. He said the number of original shows from international markets would ramp up significantly next year.

“That is going to grow very dramatically next year with things we already have in the pipeline – delivering local-language scripted series around the world,” he said, highlighting the success of German production Dark and Brazilian show 3% outside their home markets.

“What’s really exciting is that the content we’re producing for the world, both in English and in local languages, has proved to be very global,” he said.

Sarandos said that it was impossible to “manufacture a global show” but that shows produced for specific local markets often had global appeal.

Sarandos said that Netflix also plans to increase the number of films it produces with 80 films to be either acquired or produced for the platform next year. He said that Netflix would not conform to the model of releasing movies in theatres ahead of their appearance on TV, arguing that it made no sense for the SVOD provider to “hold back a movie from 100 million people so that a few thousand can watch it” in a cinema.

Sarandos said that Netflix would achieve a 50:50 mix between acquired and original content by the end of 2019. However, he said the platform would continue to license some shows in secondary windows and maintain a movie catalogue of titles that appealed to its base.

On Disney’s move not to renew its deal with Netflix and to focus on its own direct-to-consumer offering in the US, Sarandos said the industry was in for “an interesting couple of years…while everyone figures out the landscape”.

“I don’t really know totally what Disney going direct to consumer means, and I’m not positive that they do either,” he said. He said Disney had always operated direct-to-consumer in some areas and it was not yet clear if this heralded a long-term move to retaining all their own content exclusively or offering their content via a mix of third-party retailers and their own services.