Pay TV and OTT revenues, including SVOD and download-to-own, will bring in close to US$300 billion by 2022, according to new research.

Digital TV Research’s OTT and Pay TV Forecasts reports predicts the combined total will grow from US$239 billion in 2016 to reach US$283 billion in five years’ time.

The contribution of OTT revenues, which comprise AVOD, SVOD, TVOD and DTO in Digital TV Research’s working, will increase 14% to 29% by 2022. 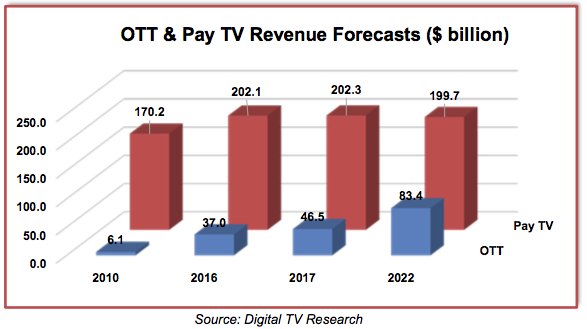 Pay TV revenues will fall over the same period, though the decline will be small. SVOD subscriptions will reach half the pay TV total by 2022, up from 27% in 2016.

Digital TV Research notes that SVOD subs grew “tenfold” in the period between 2010 and 2016 – unsurprising as both Netflix and Amazon went global during that time and became players in original content – and will double between 2016 and 2022 to 546 million.

Pay TV subs are increasingly under threat from young customers, who are less likely to consume linear TV, but Digital TV Research claims the medium “is not dead” despite predicted falls in North America. This is largely down to growth in China and India.

The analyst claims there will be one billion subscribers overall in 2022, with Europe remaining flat and Asia Pacific increasing by 92 million.

China will add 40 million, meaning a total of 353 million, and India will get 30 million new subs, creating a total of 179 million. The two territories will account for half the global pay TV subs by 2022.