Stranger Things dominates Spain’s charts as the global hit continues its success into season two, but the country is unique for its love of local-language originals. 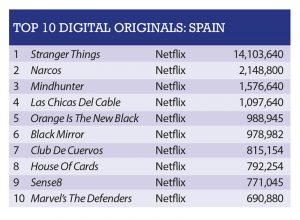 The Duffer Brothers original was also placed first in the top ten overalls list, marking one of the few times a digitally-produced show has topped broadcaster-produced fare.

The series has been so popular, Netflix has added aftershow Stranger Things Beyond to add viewing hours around the hit.

However, what stands out in Spain’s demand lists is the popularity of Spanish-language originals, which Netflix is increasingly investing in to attract local subscribers.

In the overalls list, Stranger Things only received four million more demand expressions than the runner up show Sé Quien Eres, which trumped Game Of Thrones on the list. 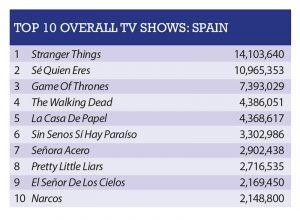 Telecinco drama Sé Quien Eres had 48% more than the ever-popular GOT and generated three times more demand than AMC’s The Walking Dead, showing the steady interest in local-language shows in the area.

Netflix’s recent release Mindhunter has also performed well as a digital original in Spain, coming in third place after Narcos, which mixes both English and Spanish.

Despite recent controversy and unpredictability about what will happen to House of Cards, it still appeared in eighth place, showing a clear viewer demand for the show.

The rest of the list is made up of shows that remain steady in popularity, Orange is the New Black, Black Mirror, Sense 8 and Marvel’s The Defenders.

The rest of the list is made up of the ever-popular hits Pretty Little Liars and Narcos.