Our latest chart throws up a surprise, considering the amount of marketing, social media posts and office chatter around Stranger Things: the Netherlands still prefers Game of Thrones. 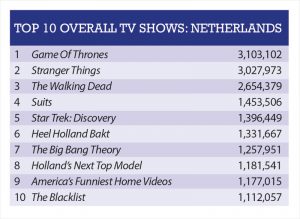 Both shows were comfortably ahead of The Walking Dead, whose eighth season was noticeably less anticipated (and rated worse) than recent runs.

However, The Walking Dead closed the gap on Game of Thrones when compared with our Europe-wide special chart lists earlier this month, which saw the latter well out ahead.

All three were a long way in front of the fourth placed Suits, which also featured earlier this month in the Netherlands, as well as in our Norway list. 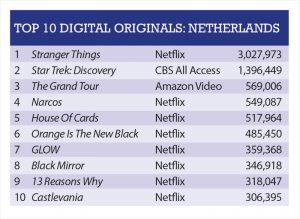 On the digital front, Stranger Things took almost three times the average demand as the second placed Star Trek: Discovery, which is locally available through Netflix.

Amazon’s The Grand Tour is third, but is almost three times behind Star Trek, demonstrating how far ahead Stranger Things currently is in terms of demand.

House of Cards, which is to end after its sixth season with star and producer Kevin Spacey facing questions over his conduct towards a minor, is fifth, narrowly ahead of Orange is the New Black and GLOW.

The data suggests Stranger Things will push Game of Thrones even closer as more people binge through the series, which follows how supernatural events in a small American town affect a group of children.